Awin Global has been crunching the numbers and looking at the highlights. Follow us below to see insights from the big day.

Run up to Black Friday

Black Friday 2019 presents a dilemma, falling as late in November as it’s possible to do so. Therefore comparing the same promotional days means a six day shift in order to compare like-for-like.

While we pull our hourly numbers to build a picture across the day, We can already see some interesting patterns emerge in the affiliate split of commissions. 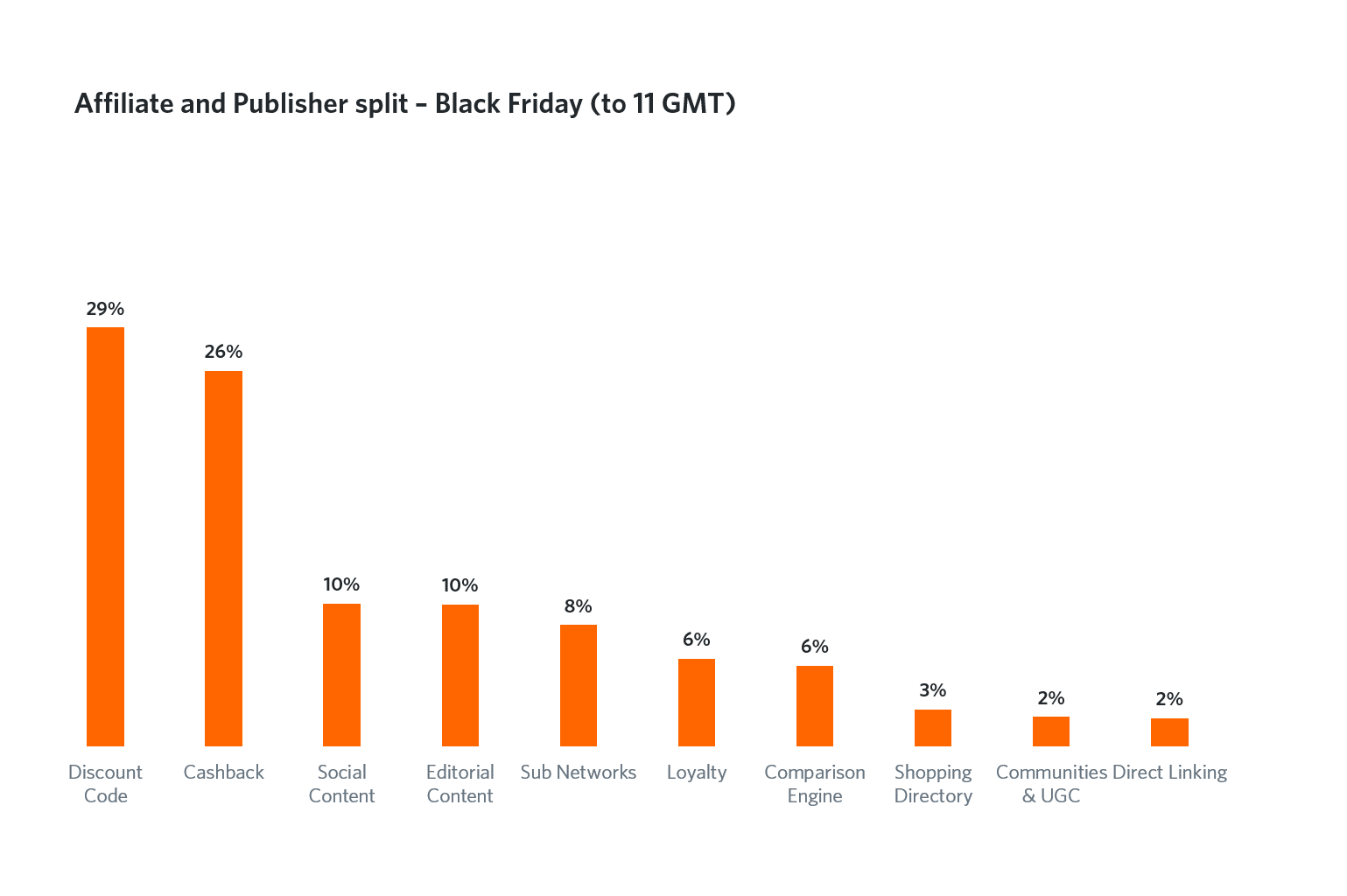 Of particular interest is how important social content has become to the affiliate mix from a much smaller position in previous years. It should come as no surprise that for an event dominated by promotions, offers and deals, discount/vouchers/coupons and cashback are way out in front.

Black Friday often witnesses a massive spike in certain sectors. Traditionally dominated by higher ticket electrical items, other businesses have muscled in more recently and telco in particular has been successful in ramping up their sales across Cyber Weekend. Today though we're seeing almost one in five commissions paid out in the health and beauty sectors: 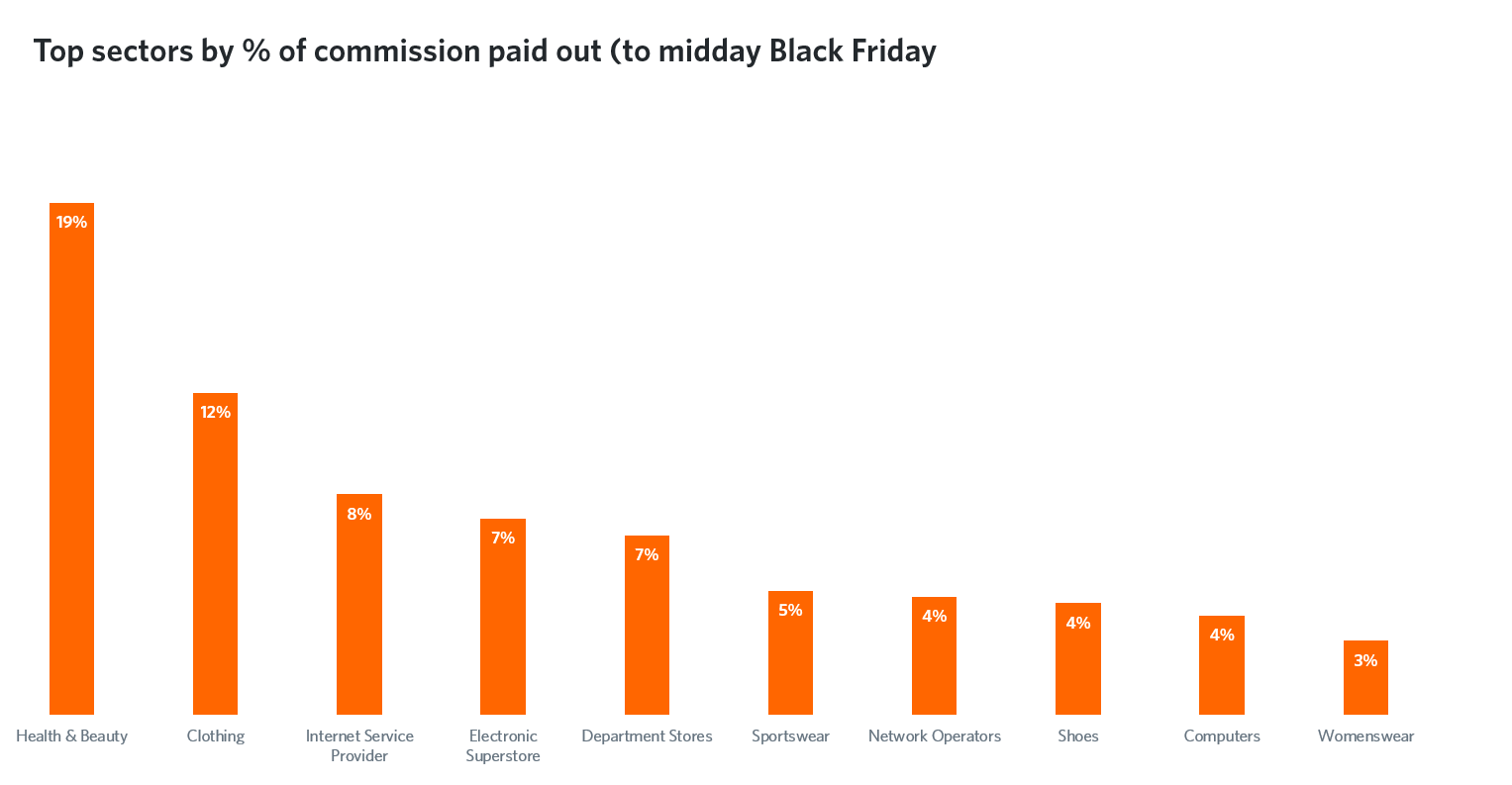 While health and beauty may be knocking it out of the park for commissions, when it comes to clicks, it's all change. As mentioned, consumer electronics play a large part in driving up AOVs on Black Friday from their usual sub-€80 figure. Clickwise too, they overindex: 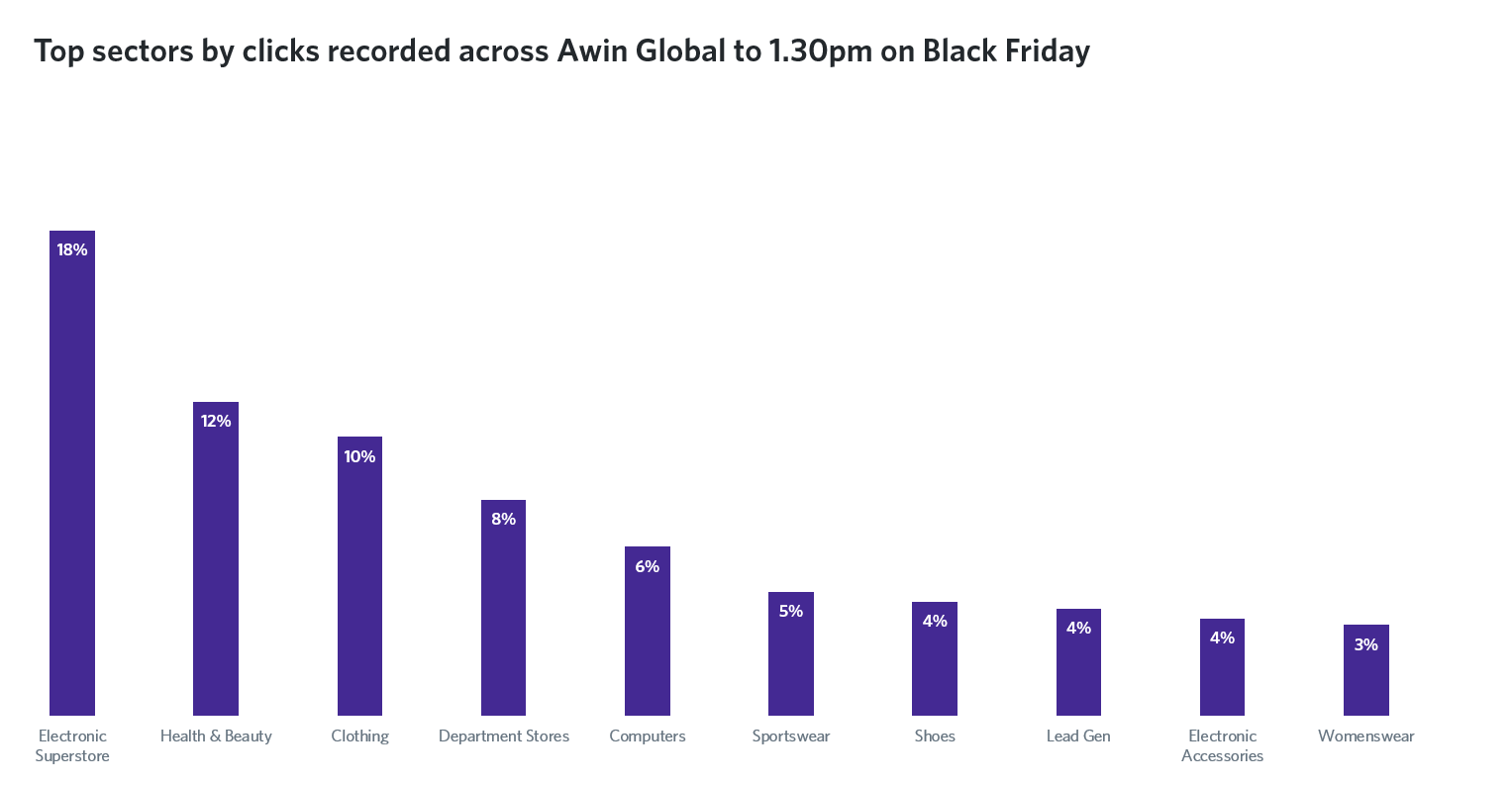 Device splits always provide an idea of how consumers are shifting their purchase behaviour over time. While certain markets like Sweden and the UK have led the way in the volume of clicks and sales tracked through handsets, other countries have still preferred desktop. While this year may see desktop still narrowly push smartphones into second place for sales and revenue tracked, clicks tell a different story. Here you can you see the split between the two as monitored since 2017, using Cyber Thursday 2019's numbers for context: 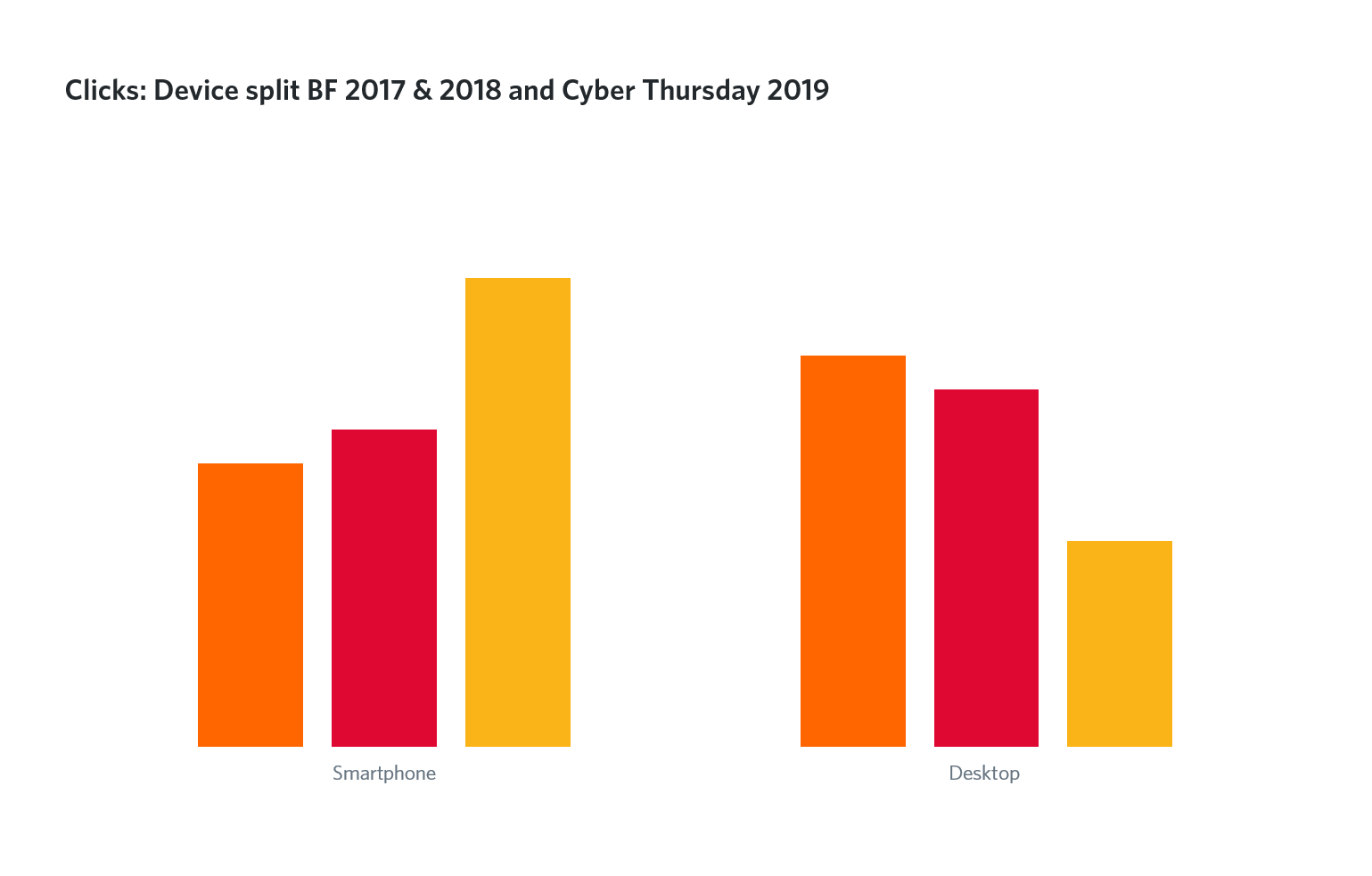 Device trends over November by sales

While clicks have always outpaced sales, revenue and commission, 2019 is set to be the first Black Friday where transactions on smartphones exceed desktop for the first time.

This is a trend that has been edging upwards across November as these network-wide stats indicate up until November 28th: 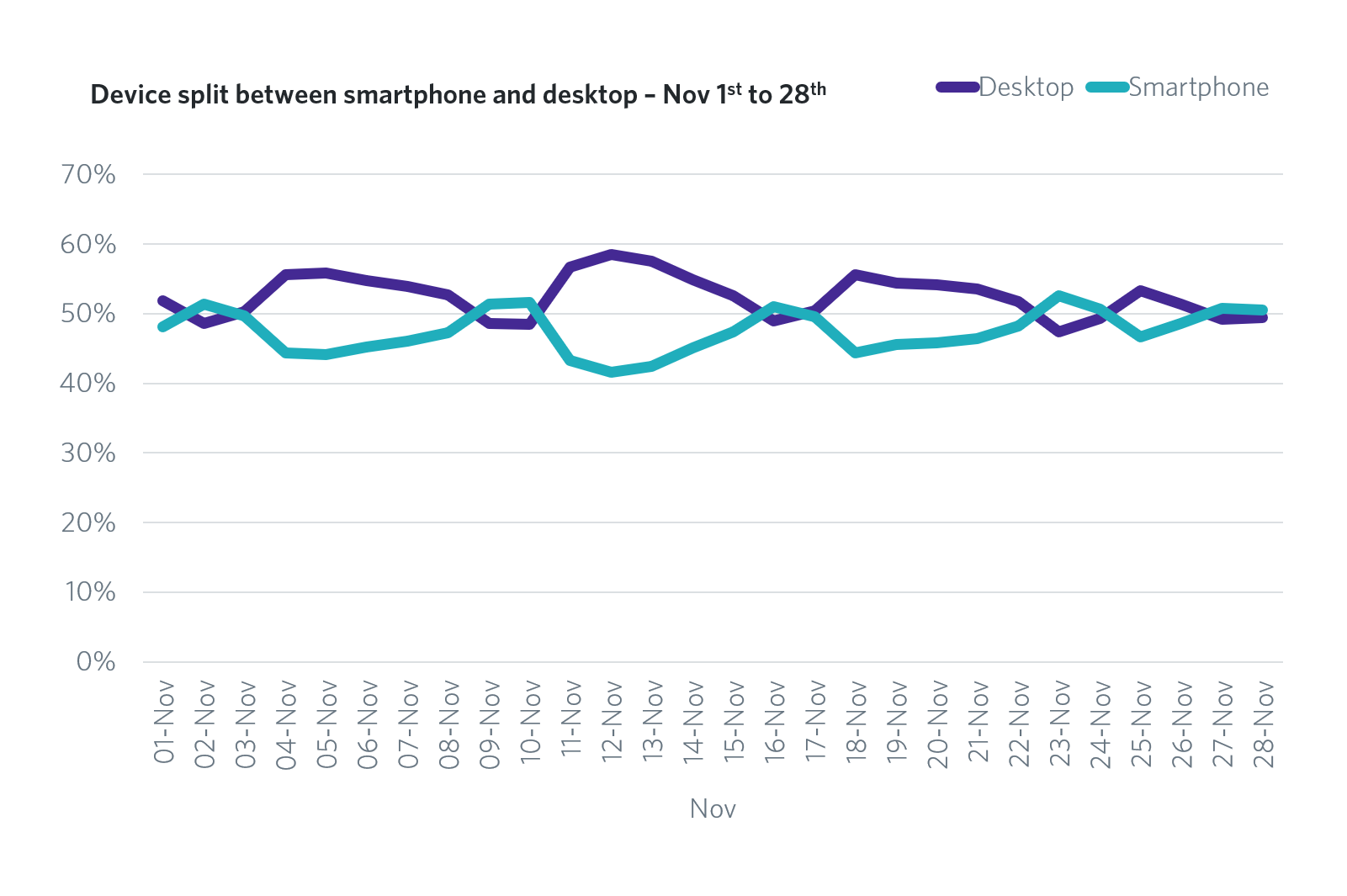 © 2021, AWIN AB. All rights reserved. Awin is part of Axel Springer Group. No part of this publication may be reproduced, translated, stored in a retrieval system, or transmitted in any form or by any means, electronic, mechanical, photocopying, recording or otherwise, without the prior permission of the copyright owner. 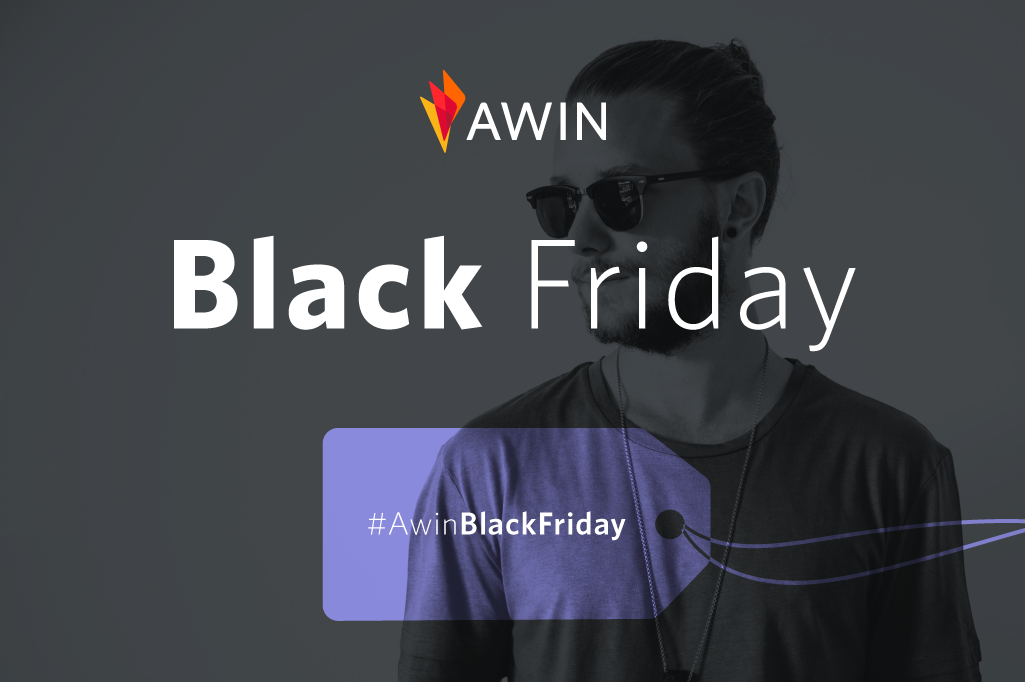