With more than €500m tracked across the Cyber weekend and double-digit year-on-year growth, Black Friday’s place in the retail firmament remains undiminished.

Despite many brands viewing it with caution, there is no doubt about its current ability to drive consumers online in a concentrated period of hardened retail is unrivalled outside of the Chinese phenomenon of Singles’ Day.

Falling late in the month (six days later than 2018), Black Friday threw up a number of unknowns: would November feel ‘later’ compared to the retail creep we’ve seen over the past few years pushing peak ever earlier? Would this redress the increasing imbalance with December and push some of peak back into the final month of the year? With payday falling on Black Friday for many consumers, what would this mean for retailers? Given the lateness would this mean shoppers would focus on gifting for others rather than themselves? Would Black Friday continue to dominate or would Cyber Monday make a resurgence? 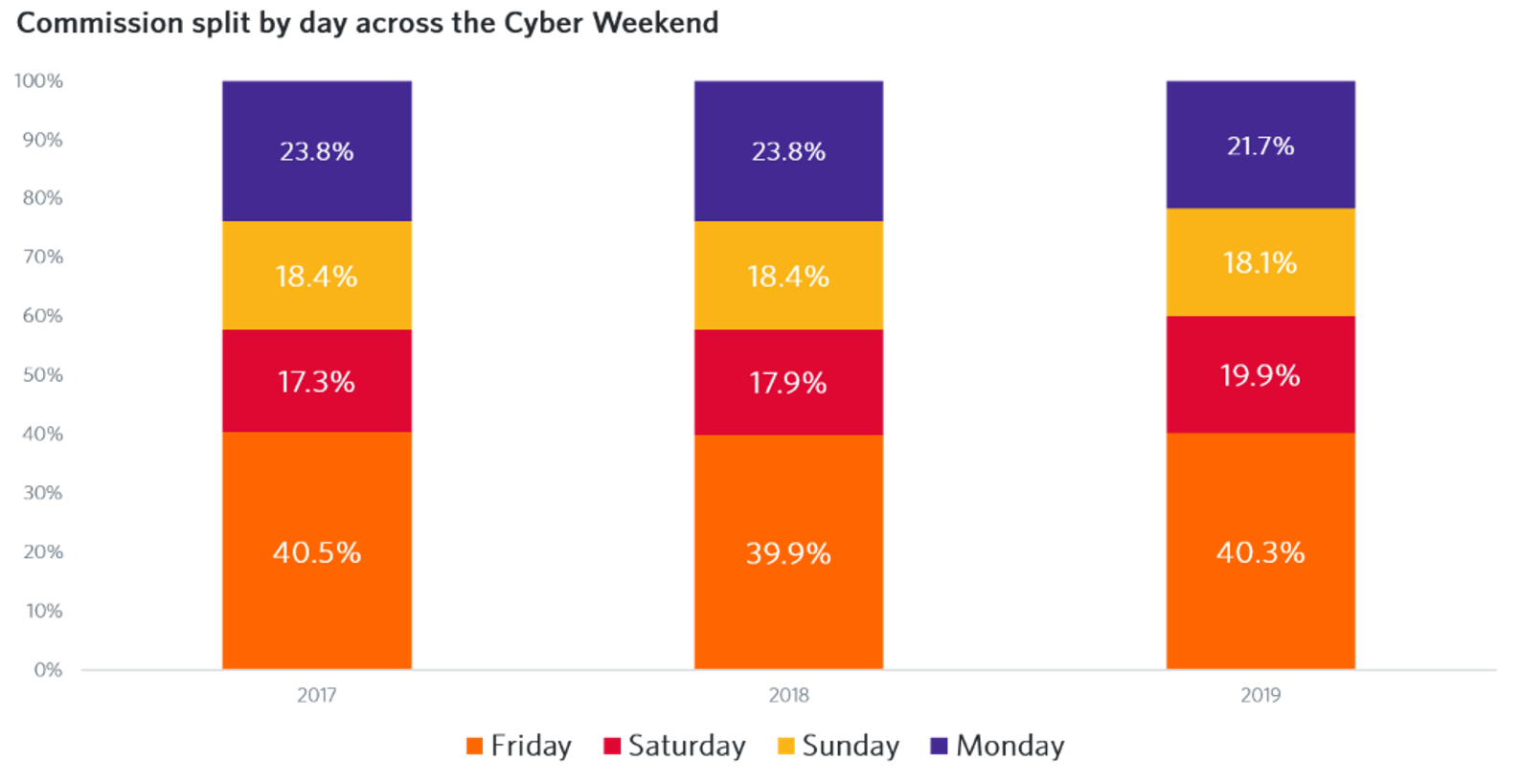 As it transpired, despite falling in December, Cyber Monday continued to grow but lose ground to Black Friday. It also dropped back in terms of share of affiliate commissions across Awin when considering the four day weekend as a whole, perhaps indicating that consumers were experiencing retail fatigue by the time Cyber Monday rolled around.

This is also demonstrated in detail from around the peak trading window in November, with Cyber Monday and the preceding Sunday seeing the smallest YoY commission increases:

Across the course of the two big trading days there is not much variation in terms of peak sales. 9pm represents the time when transactions and commissions are most likely to be tracked. As ever there is a midnight peak as both days start but this was less pronounced than in previous years, perhaps indicative of a more savvy consumer and offers ‘going earlier’ in the week:

As ever the most interesting nuggets and insights can be found when digging even deeper into the detail beyond the big headline numbers. What was particularly encouraging in 2019 was the drop in reliance on the traditional triggers of vouchers, coupons, codes and cashback. As business models perfectly placed to take advantage of cyber week, they still account for the biggest chunk of sales, however this has diminished, replaced by a surge in commissions tracked via social media channels.

This is most prominently demonstrated when we look at the commission share for four of the biggest publisher models across devices. Here you can see the allocation of commissions across desktop and handset for four different and distinct revenue streams within the affiliate channel: 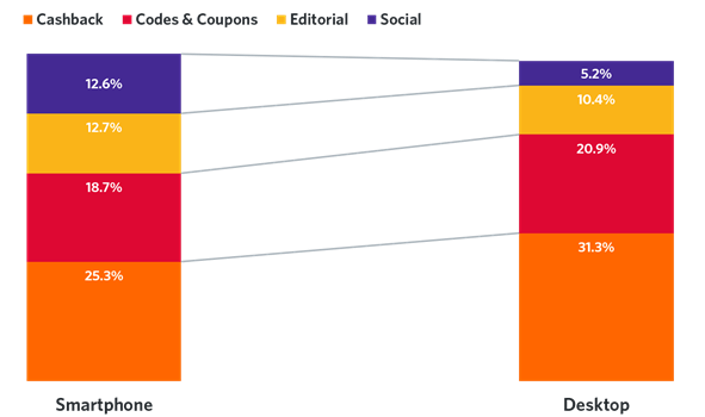 With editorial and social accounting for just over a quarter of commission payments this is an encouraging counter-narrative to the traditional discounting tradition of Black Friday.

Finally, we know affiliate marketing is a fantastic way of expanding local programmes into additional markets. One of the most satisfying trends was seeing globally focused programmes working seamlessly across multiple countries. One beauty brand was so successful they tracked almost €10m in revenue across their 15 affiliate programmes through Awin. For a sports brand their 24 programmes nudged €40m in November. The growing popularity of affiliate marketing across the world is paying handsome dividends for those brands who embrace it. 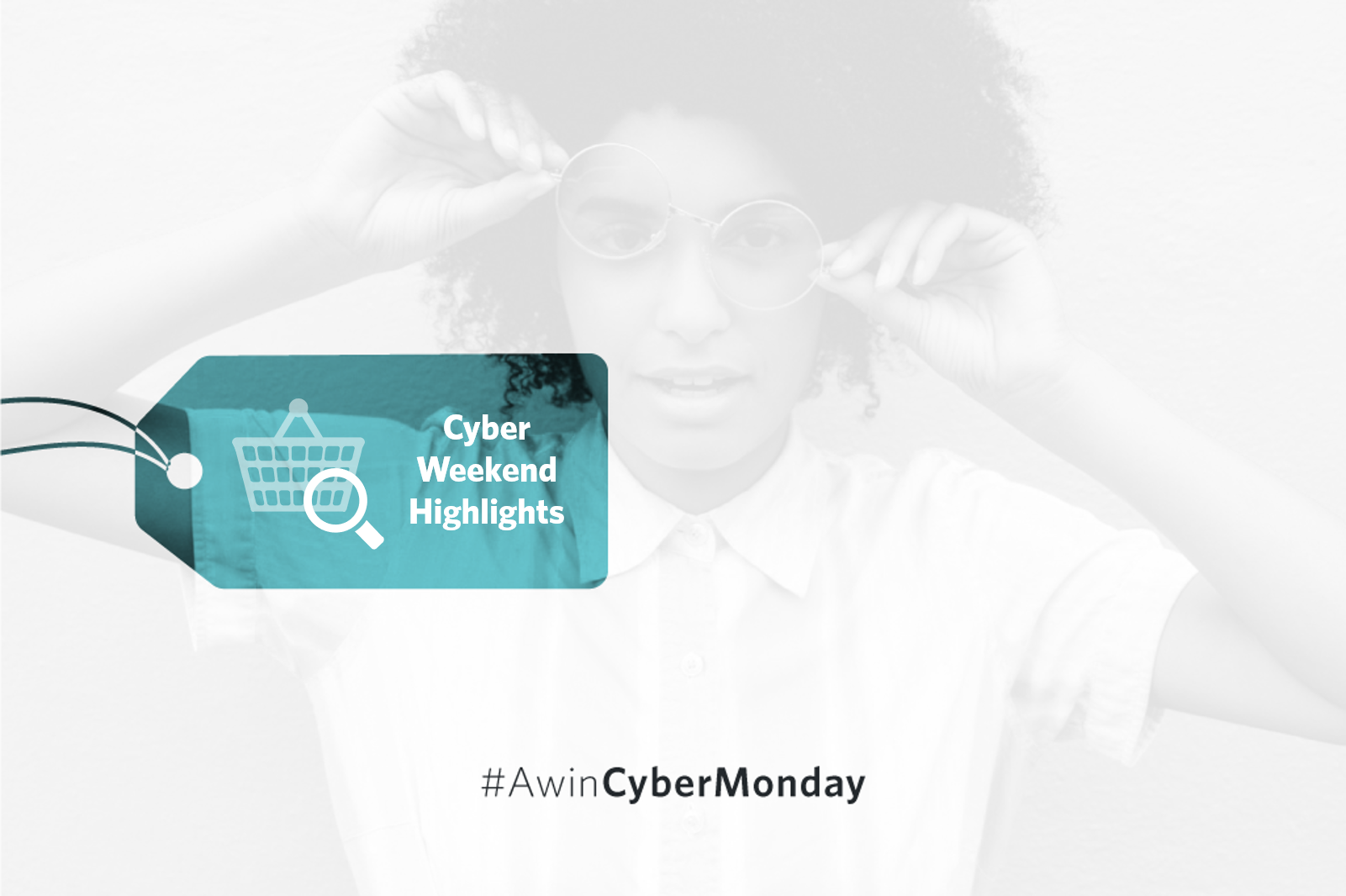