Despite the most volatile and unpredictable Black Friday to date, Awin broke all records, tracking more than two million sales and over €200m in revenue.

Given Black Friday fell on the latest possible date in the month, there was a fear that the drive to push Black Friday promotions ever earlier in November could have led to consumer fatigue by the time the big day rolled around. But advertisers and publishers needn’t have worried as their combined efforts drove commissions up by 24% across the global affiliate network.

Leading the way were the southern European nations, with Spain, Italy and France posting like-for-like commission hikes of 96%, 56% and 48% respectively.  Other markets with notable increases include The Netherlands and Belgium with a 43% spike, and, despite the relative maturity of the event in the UK, a 34% leap in earned commissions by publishers there.

This was due in no small part to the emerging power of influencers as social media tracked more than one in ten sales across the day.   Compelling health & beauty and telecom deals also drove thousands of consumers to part with their cash.

Other highlights witnessed across the network included: 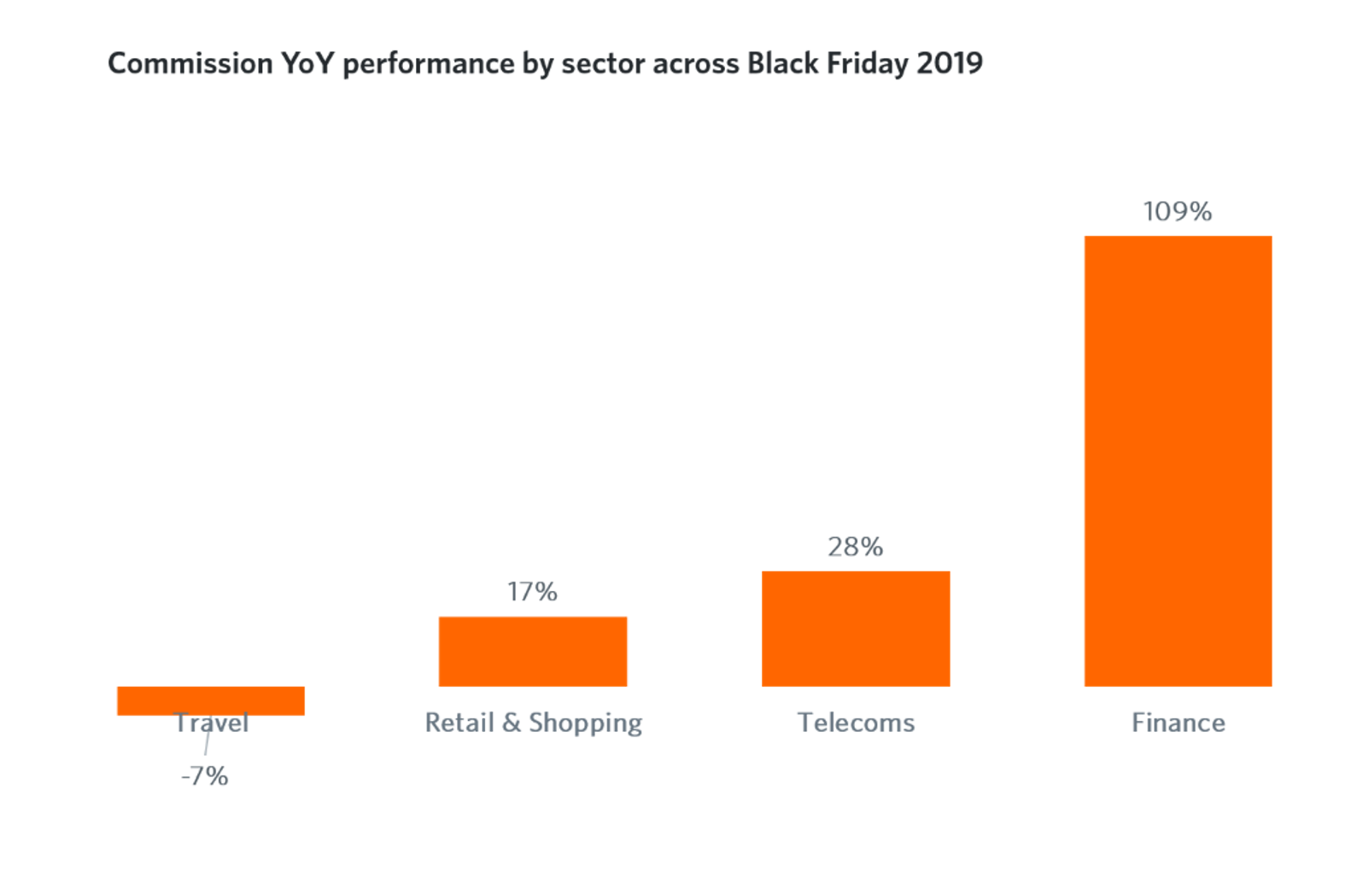 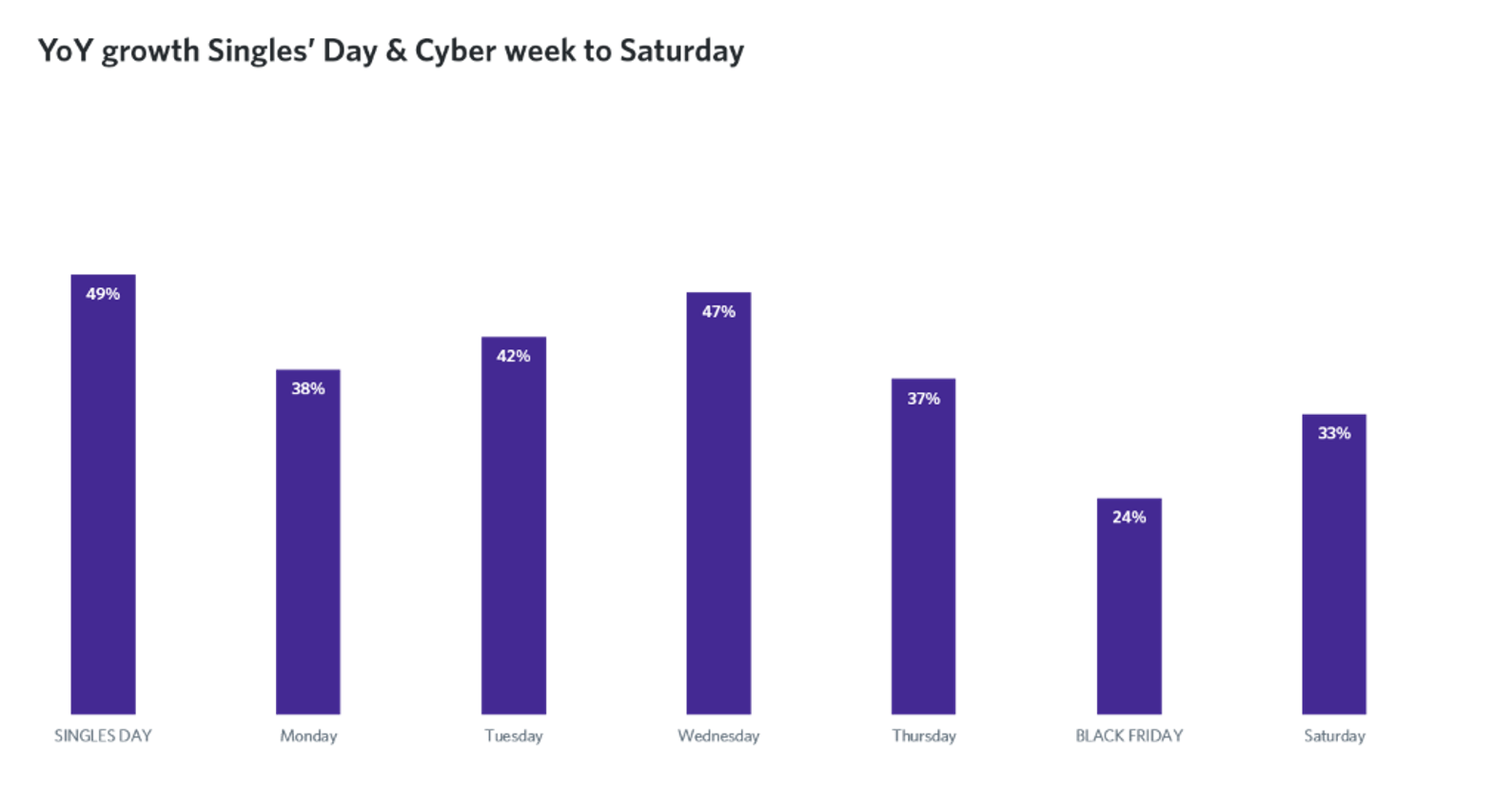 Despite impressive commission growth on Black Friday, higher year-on-year hikes were seen on the days preceding the main event, signalling how many brands push their Black Friday deals earlier.

Growth exceeded 2018 numbers, despite warnings that many macro and economic factors may lead to dampened interest. Possibly because Black Friday in 2019 was almost a week closer to Christmas and partly because many consumers were paid around Black Friday, boosting their disposable income.

Mobile came close to overtaking desktop for the first time as the largest device. Checking on Friday afternoon, it was edging desktop out but as people turn to their traditional devices at home in the evening so the balance shifted: 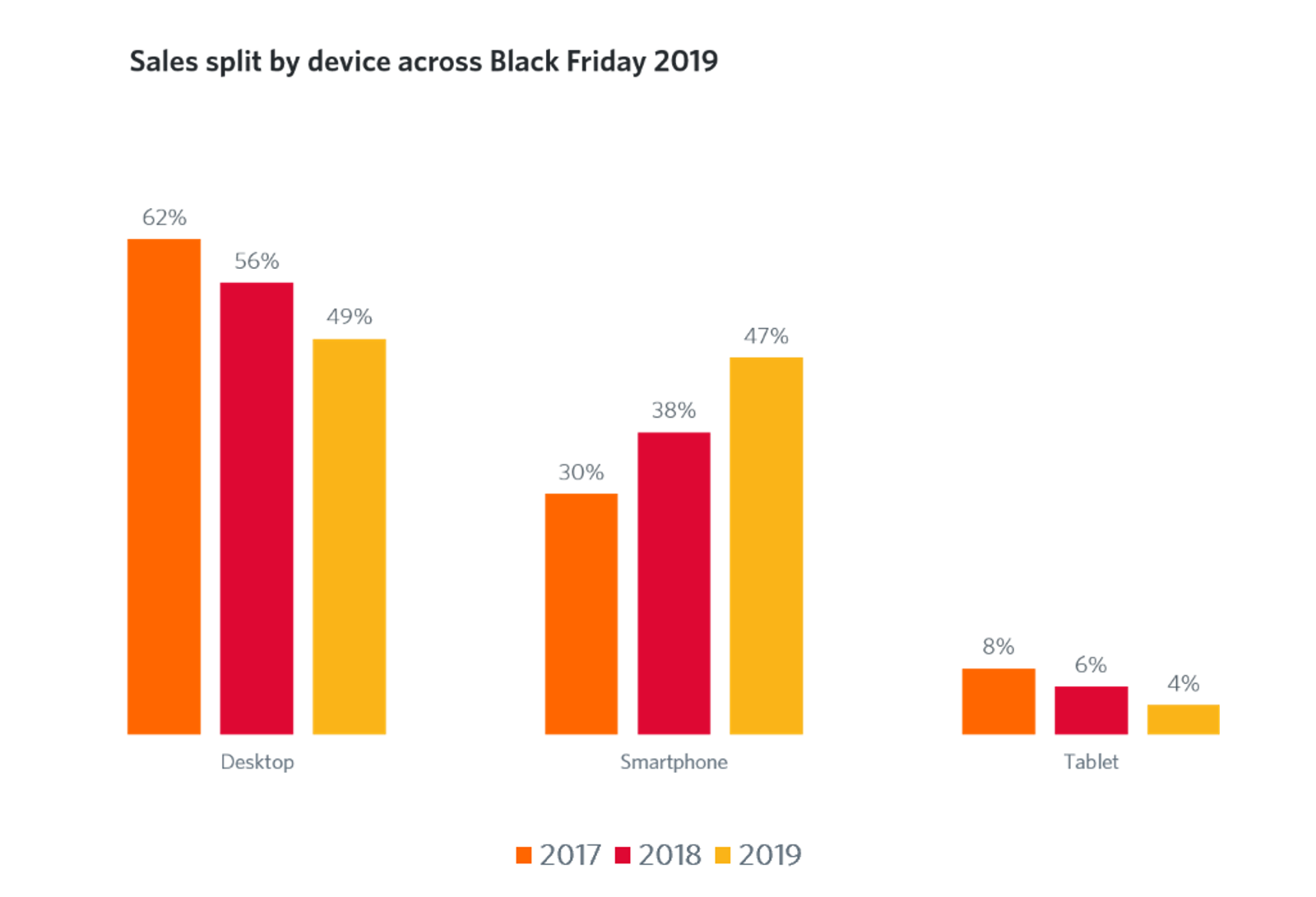 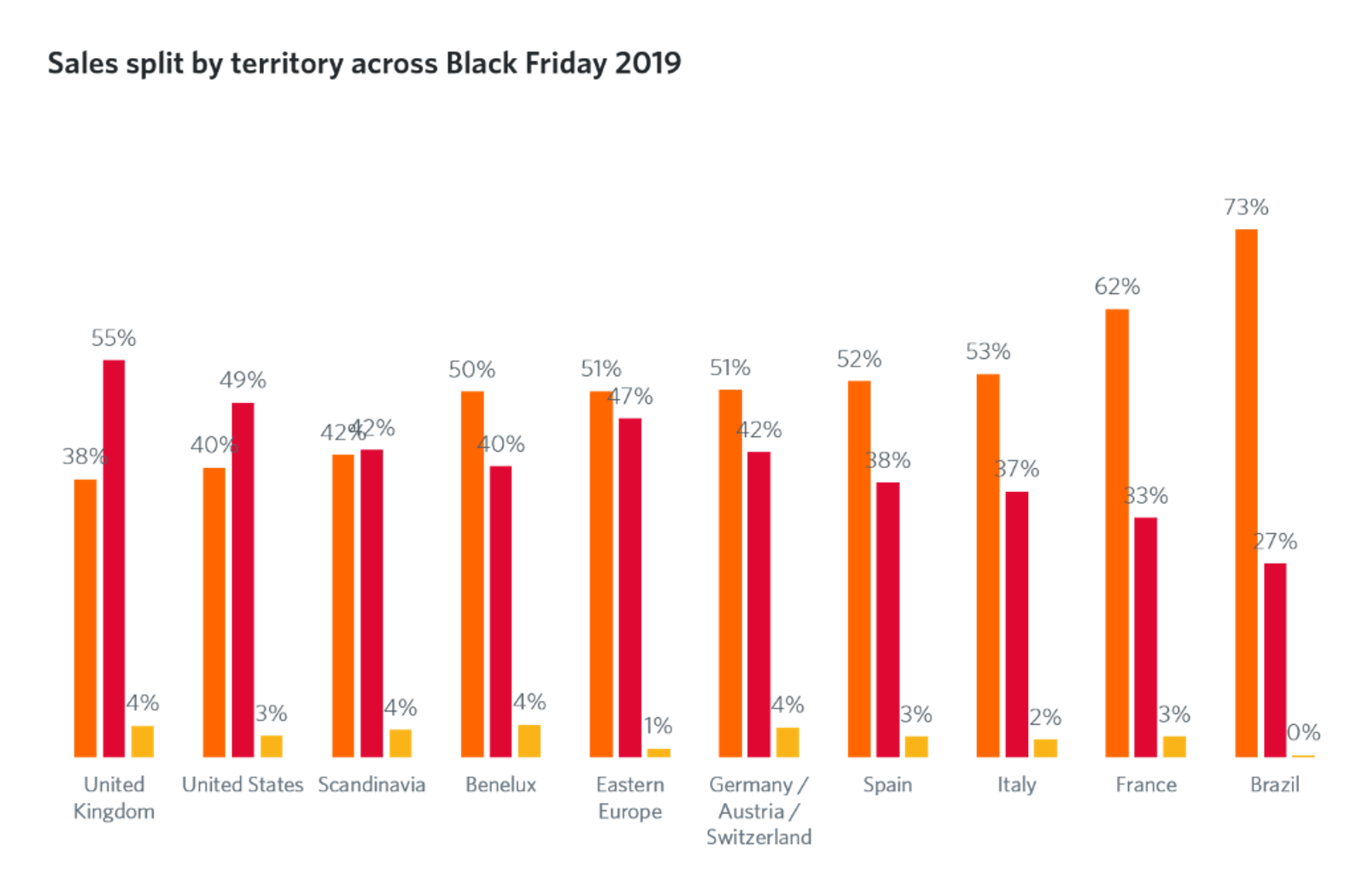 Yet again there were pronounced regional variations, with sales twice as likely to originate from a handset in the UK than Brazil.

As with much in affiliate marketing, due to the diversity of activity, fascinating patterns emerge when you delve deeper into the data. Nowhere is this more apparent than in publisher, affiliate and partner data.

This graph shows the sales split across the top ten publishers by sales volume on Black Friday. Unsurprisingly given the nature of Black Friday, incentivised traffic in the form of vouchers, coupons and discounts emerge as the largest single publisher type at 29%. The growth over the years of influencer marketing in our channel has been well documented and this year saw that category pull in an impressive 7% of sales:

When considering which publisher type results in the highest average basket value, editorial underlines its credentials as one of the most important affiliate categories, pulling in almost €150 per sale, more than double that of social content, but potentially underlining how their strengths lie in targeting different brands and sectors: 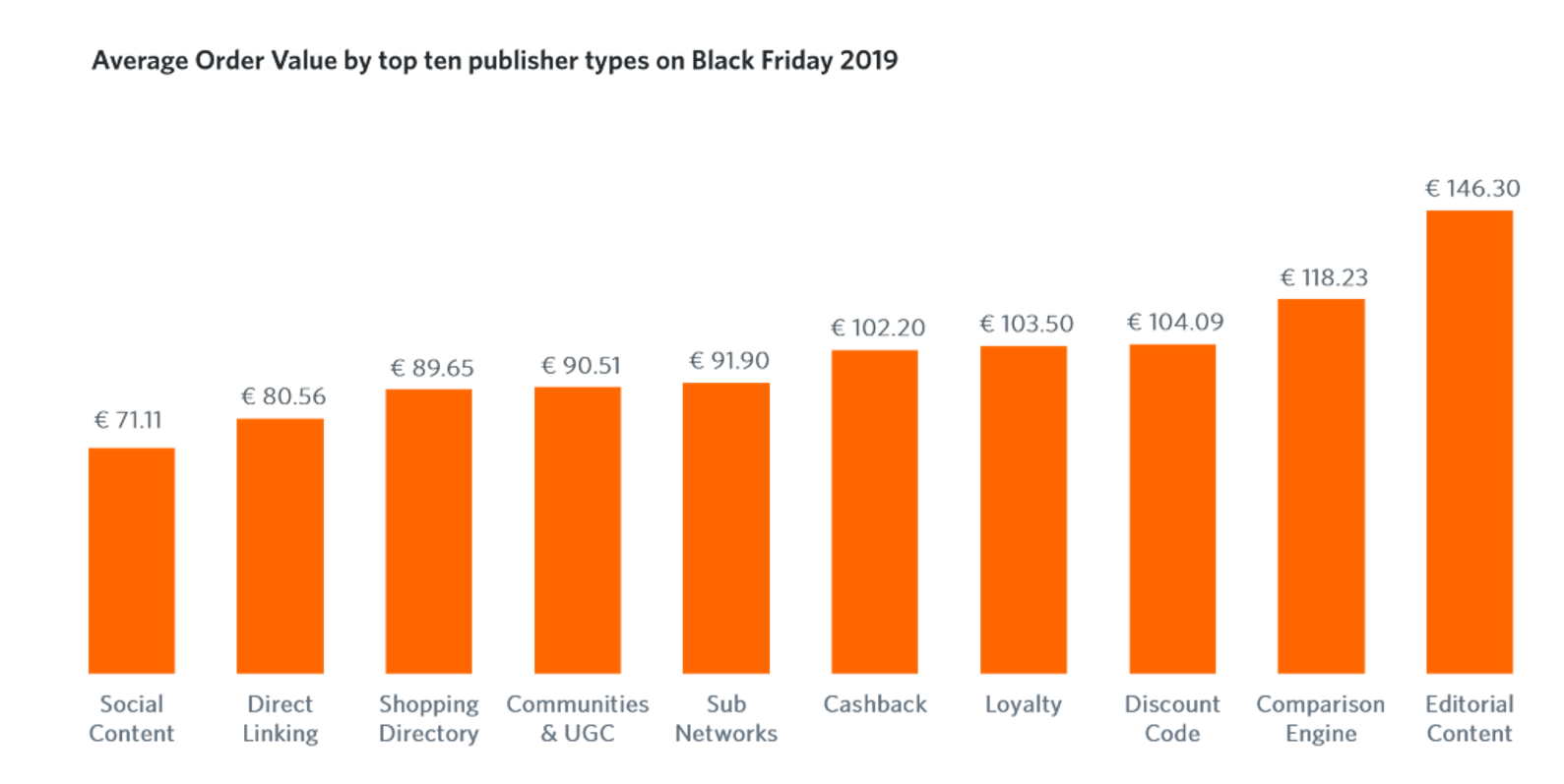 Will peak move closer to Christmas?

Given Black Friday has become synonymous with both gifting as well as buying presents for ourselves, does this year's lateness focus our minds more on what to buy our nearest and dearest, and will this alter the complexion of what we buy away from the more mundane goods and services that we've seen succeed in previous years?

What of the supposed anti-consumerist backlash as well? With some brands eschewing Black Friday and its inevitable association with heavy discounting, our minds have been sharply focused in 2019 on the environmental impact of our buying habits.

An article from The Washington Post points to a new threat for retailers; consumers 'conspicuously skipping consumption'. In the past some of the more high profile brand boycotts were seen as the exception, but could we start to see this being a demand of increasingly socially aware consumers?

Check out our fuller digest of Back Friday and trading peak to see how these trends played out which will be published later this month. 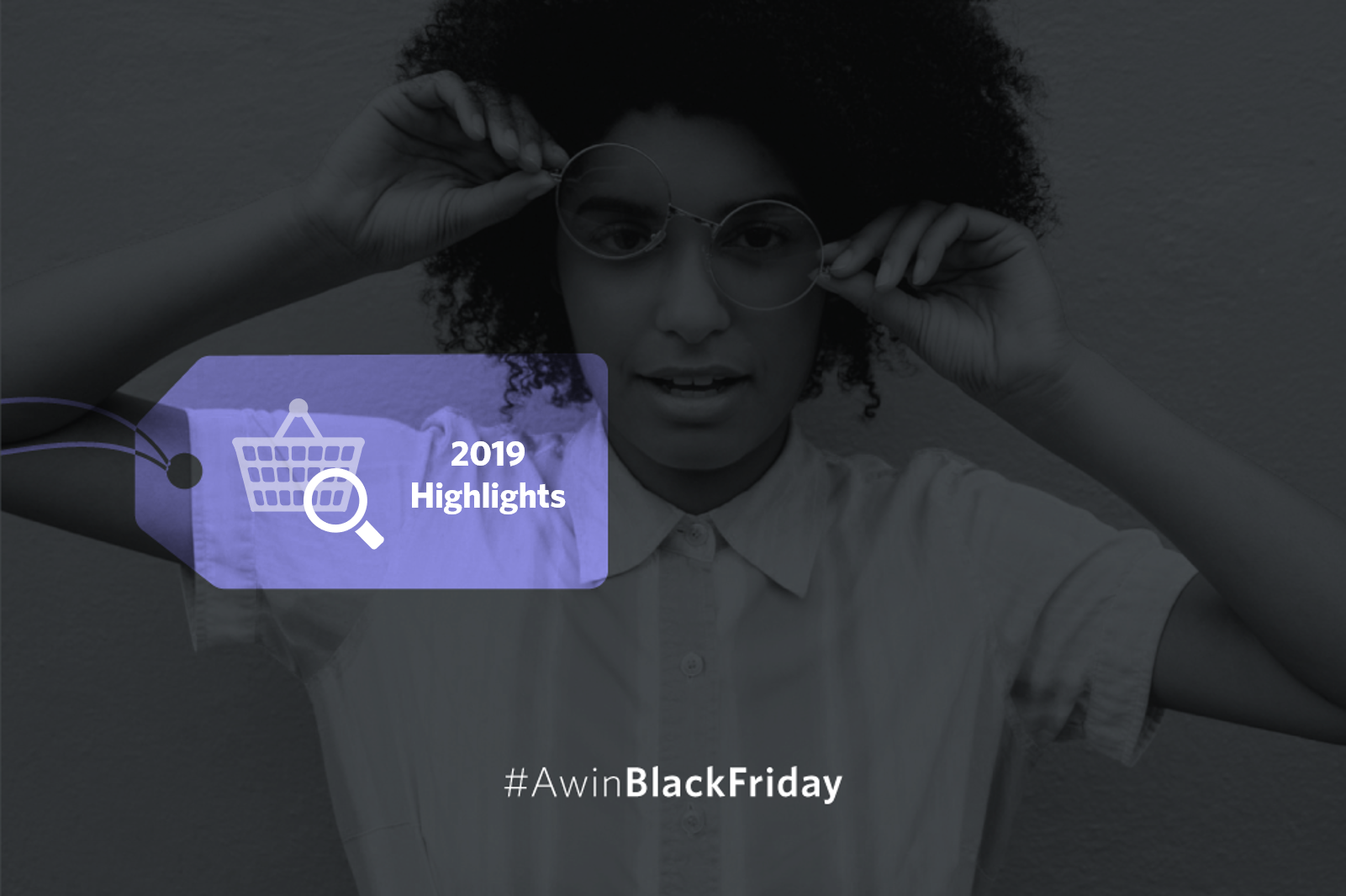