With retailers facing the most important Golden Quarter in years, the affiliate CSS space offers a huge opportunity for driving valuable sales and revenue.

The last quarter of the year has always been vitally important for retailers hoping to hit annual sales targets, but 2020’s Q4 will go down as the most critical business quarter for a generation.

With the now traditional convergence of global retail events like Black Friday, Singles’ Day, Christmas and a delayed Prime Day sneaking into 2020’s Q4, along with the massive disruption COVID-19 has forced upon retailers, this year’s peak has the potential to be more mountainous than ever.

And with lockdown accelerating online shopping habits at a rate never before witnessed, retailers are scrabbling to ensure they’re well positioned to capitalise on the inevitable sales rush that is about to flood the web.

Product search is just one tactic that many such brands are seeking to utilise. In the US that inevitably means advertising with Amazon where around two-thirds of consumers reportedly start their research. However in Europe that space isn’t quite so monopolised.

In fact, thanks to a landmark 2017 ruling from the EU that forced Google to open up its comparison shopping platform to other players, this area has become a real growth driver for brands in recent years.

The growth of CSS across Awin’s network

Comparison Shopping Services, or CSS as they’re more commonly known, have rapidly become a key asset in effective affiliate programmes, particularly retail. Of all the CSS activity that Awin tracks on its network, currently 93% of it occurs within the retail sector and those same partners are now generating almost 5% of all Awin’s retail sales.

The growth in popularity of CSS has been one of the striking success stories of the last couple of years in affiliate marketing and since the start of 2020 that has been especially true.

Comparing the growth of CSS partners to that of other partner types so far this year illustrates this point. 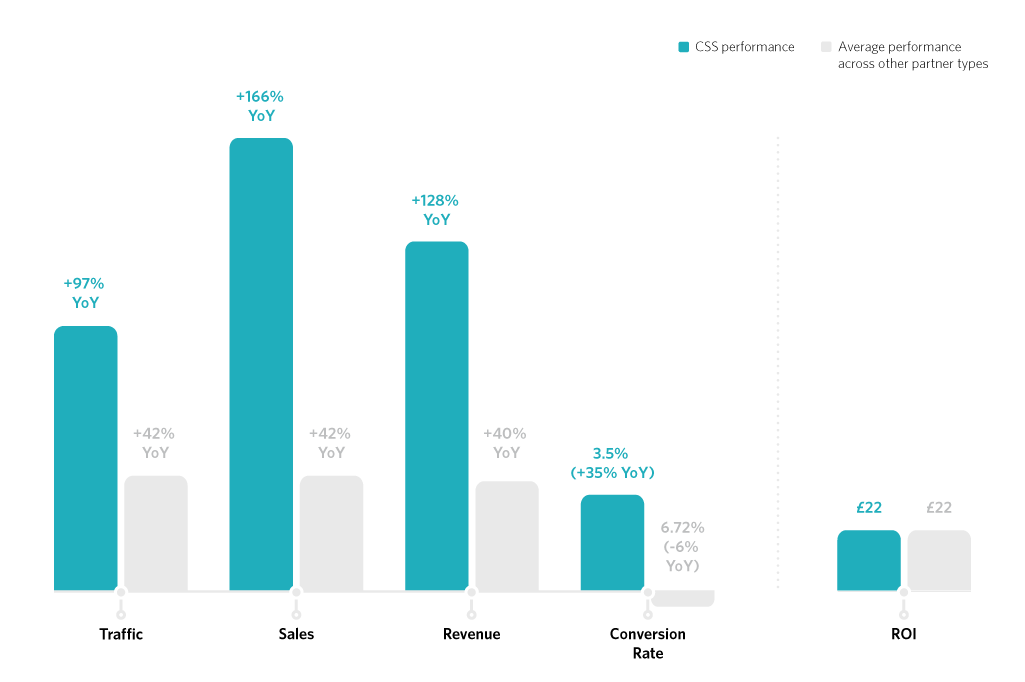 Traffic, sales, and revenue have all exploded for the CSS niche in 2020, outstripping the already impressive growth we’ve seen on those metrics across all other partner types.

ROI is a more even match with CSS providing a network average return on spend of £22 which is still hugely enticing for brands considering where to invest their next marketing dollar at the moment.

And, while CSS’ (much improved) conversion rate of 3.5% pales in comparison to the network average of almost 7%, it’s worth remembering that product search does tend to feature earlier in the sales funnel. CSS can provide a great platform for brand and product awareness as well as new customer acquisition, an invaluable tactic around this peak trading period.

Looking closer within the sector it’s interesting to note which retailers have already successfully adopted CSS tactics as part of their arsenal, and which have only recently sought to take advantage.

Below, we can see the top 5 retail sub-sectors which make up the largest share of CSS sales currently, and those sub-sectors that have seen the most rapid growth in 2020. 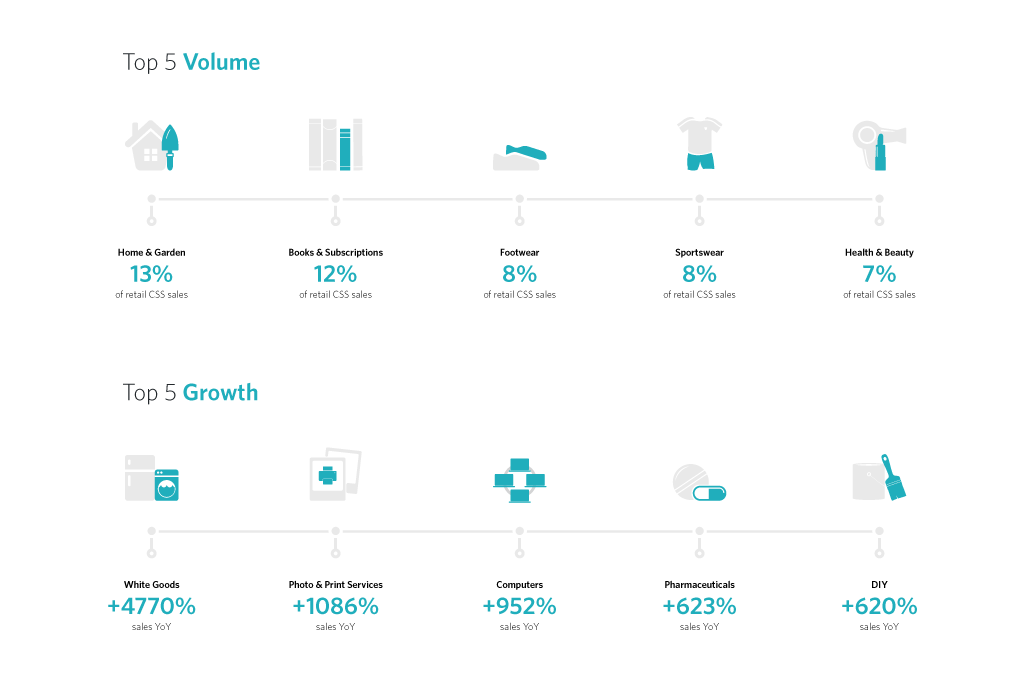 The range of products being promoted here is vast and indicative of the effectiveness of this model across online retail, a sector that has enjoyed enormous growth over the lockdown with more and more consumers resorting to ecommerce options while stuck at home.

For the sports brand Asics, their collaboration with CSS partner doo/shop in Germany saw them generate over €100,000 in sales in just eight weeks.

Awin has tracked significant uplifts across DIY, online pharmacies and home computing as a direct consequence of changing consumer behaviour during COVID-19 and many of these brands have responded by successfully incorporating CSS strategies into their affiliate tactics.

The value of multiple CSS partners

One of the common myths surrounding CSS partners has been focused on the questionable value of using multiple partners simultaneously.

As many brands already operate their own in-house strategies, why would you bother paying another CSS partner to then compete against in the bidding auction for key terms?

The truth is though that you’re never competing against your own campaigns, regardless of who is placing the bid for you. Google’s instructional video provides a simple explanation of how the process works but, in essence, the winning bid is dictated only by the next highest bid from an actual competitor.

With so many potential keywords and product terms to try and gain coverage on, it can be extremely helpful to have a supplementary CSS partner, or multiple, helping to optimise your reach.

While Google’s own CSS offering is an option for that support as it tends to work on a CPC model and typically retains 20% of the original bid price, the more efficient method is to use an independent CSS partner that works on a CPA. That means you’re only paying for sales, not clicks.

So, looking at this from a network-wide perspective, what’s the impact of having more than just one CSS partner on your programme?

We looked at those programmes where just one partner was activated versus those with two year-to-date. Comparing those programmes we’ve seen that when two CSS partners are present on one programme they’ve seen an average sales growth of more than double that witnessed by one solo CSS partner, indicating the incremental growth they individually bring to the programme. 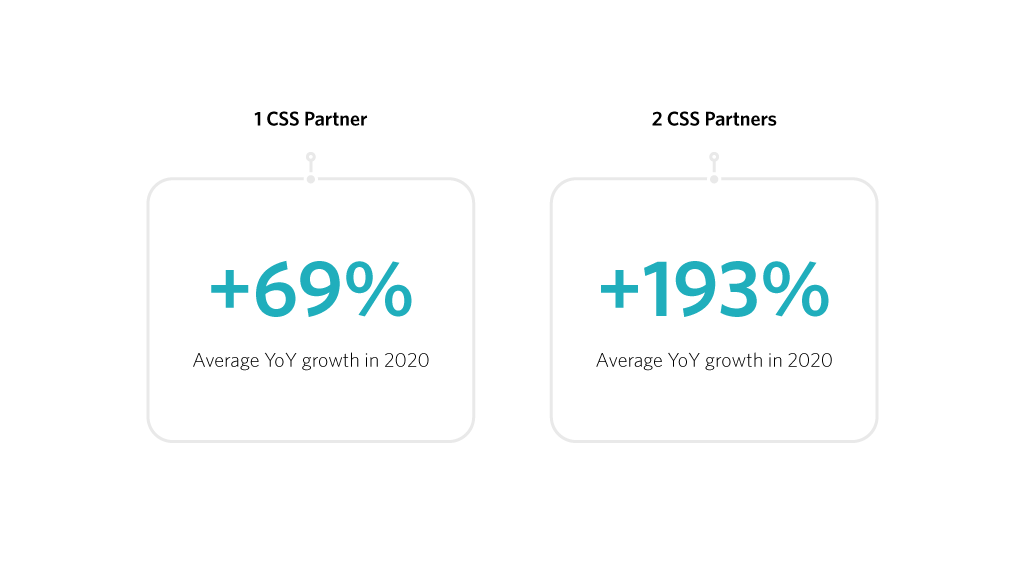 “I used to say the multiple CSS strategy in the EU, was one of the best kept secrets in performance marketing,” said Jon Lord, VP Business development, Europe at performance marketing specialists Connexity. “But now the curve is accelerating, and we are seeing many more retailers adopt this strategy. In fact 40% of Connexity’s clients are working with four or more CSS partners.”

The power of CSS during Q4’s peak

The so-called Golden Quarter is aptly named. At Awin we track a disproportionate volume of sales for our clients in Q4 versus any other period throughout the year, largely because of the global retail events that converge around this time.

The graph below plots each month’s sales in 2019 indexed as a percentage against the monthly average (‘0’) over the course of the year. Q4 is by some distance the most important period with November representing the annual climax. 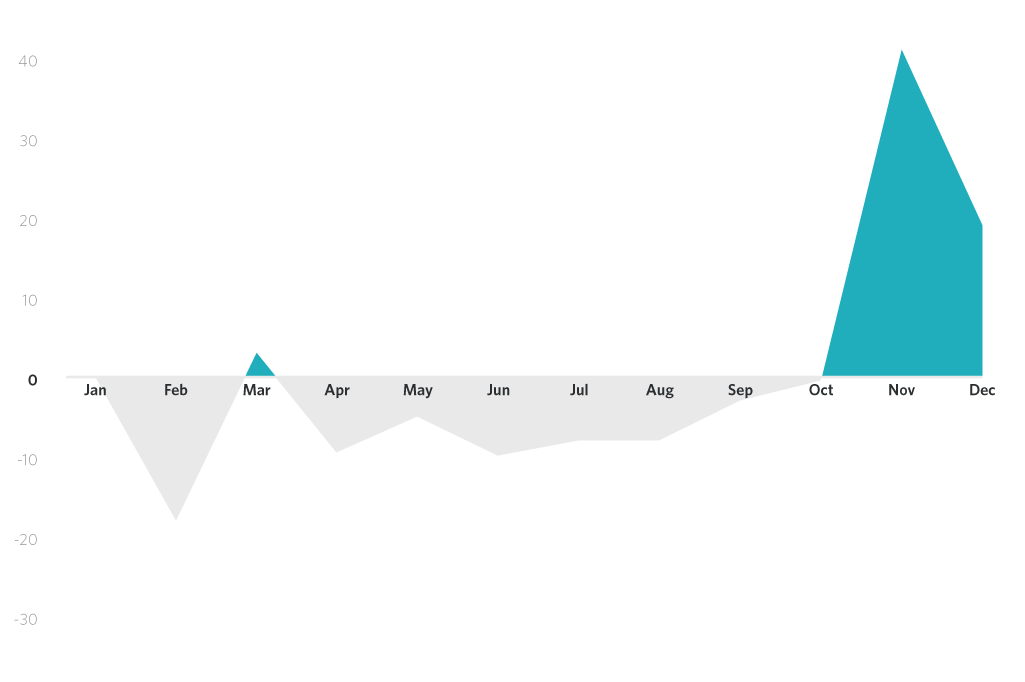 For Dorothy Perkins, the UK women’s fashion retailer, it was that knowledge that led them to experiment with CSS partners during last year’s Q4. Hoping to develop a new source of sales revenue and diversify their affiliate mix, they onboarded a trio of CSS partners to complement their own in-house team in time for peak.

Sure enough, the results quickly supported the strategy with each further partner driving additional sales over the campaign. 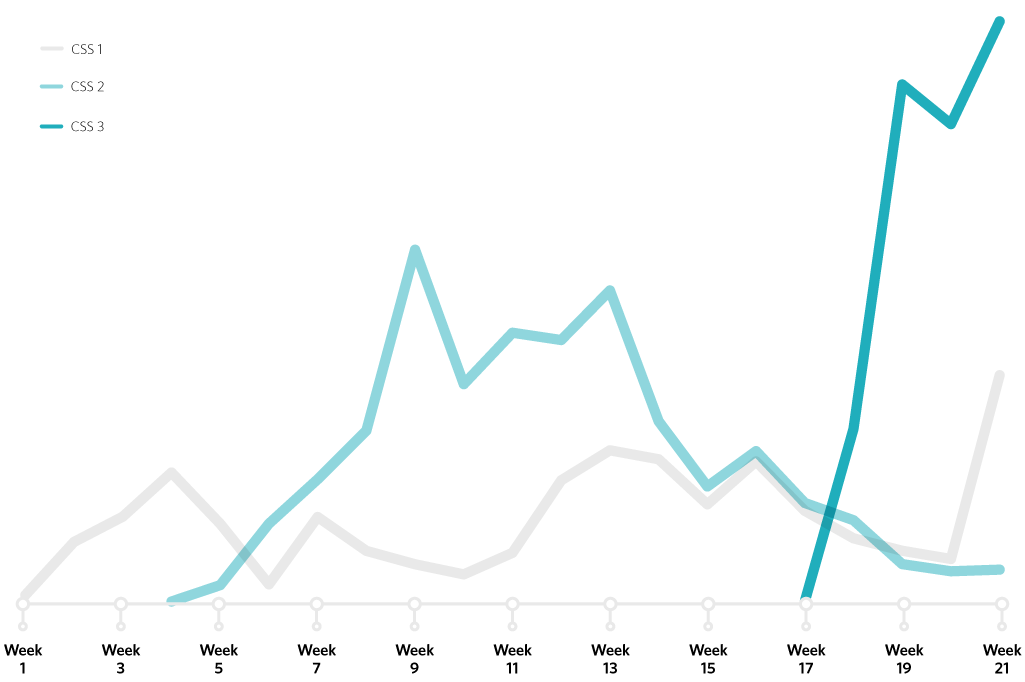 By the end of the effort, CSS partners were delivering a massive boost to Dorothy Perkins’ affiliate programme, driving:

2020’s last quarter promises to be the biggest yet. A locked down high street amid the second wave, retailers desperate to offload unsold stock and generate much needed revenue, consumers more keen than ever to look for deals to maximise their spend…it’s a cocktail for an enormous amount of online sales activity.

As we step into Q4 brands should consider how CSS partners fit into their overall channel tactics, driving growth and capitalising on the opportunity to interact with new consumers right from the beginning of their journey.

This will be imperative over Black Friday 2020 when the right brand, price and product is going to be more important than ever to a user’s purchase decision.

For those retailers seeking to capitalise on this incoming surge, there’s no time like the present to start adopting CSS as part of your Q4 affiliate strategy.

To find out more about CSS opportunities at Awin please speak to your account manager or network contact. 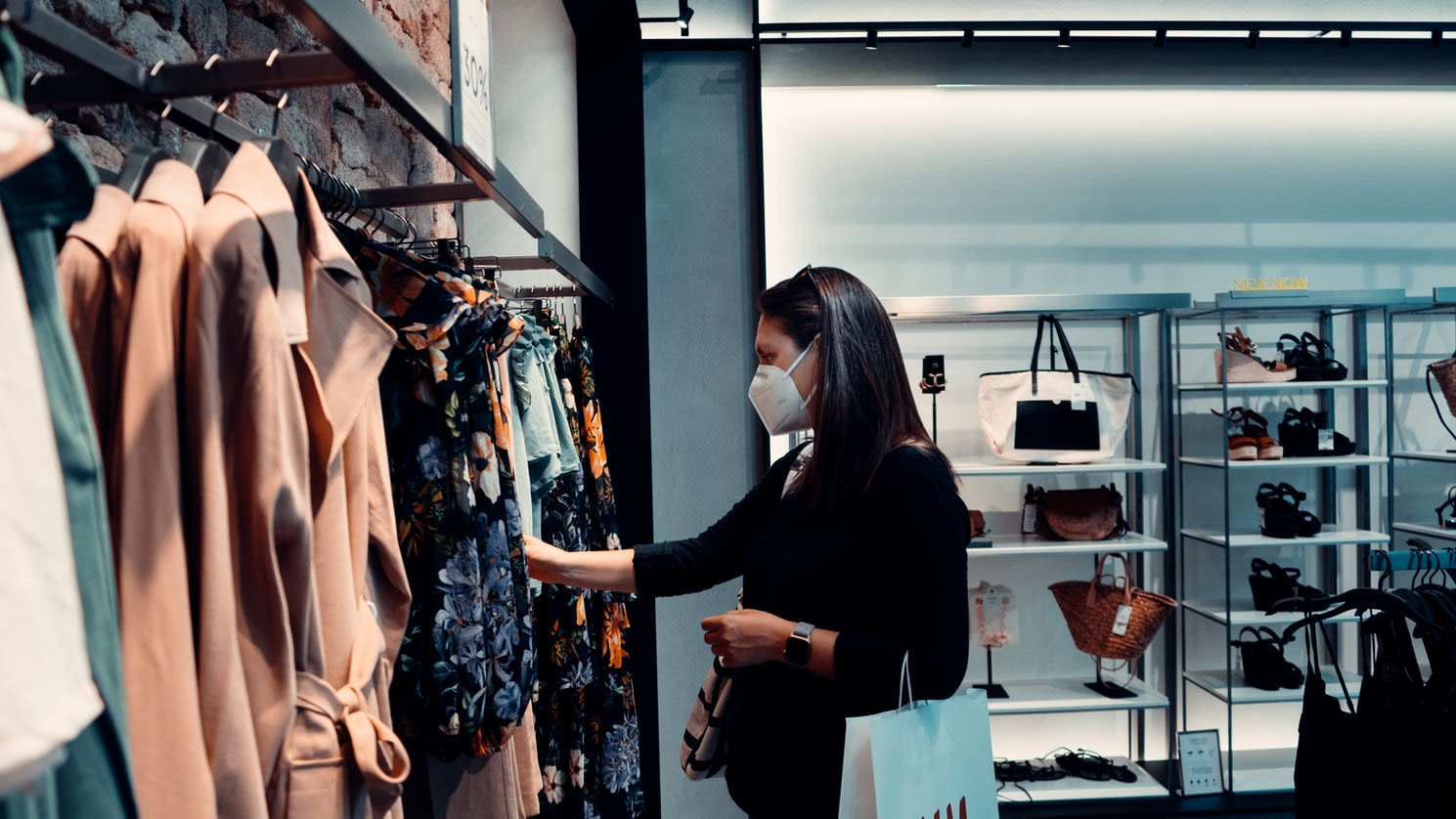