In case you missed it, we shared our data live across the day on awinblackfriday.com which updated hourly across the day to monitor events unfolding.

We saw the return of the ‘Black Friday Elephant’ as consumers took advantage of the Black Friday deals as soon as the clock struck midnight. 2016 saw two more interesting peaks with significant increase in sales volumes over lunchtime and in the evening.

So to the headline numbers:

Sales revenue driven for our advertisers on Black Friday was up 30% year on year while the volume of sales was up 27%. Average order value was also strong at £99.89.

With IMRG reporting that £1.23bn was spent on Black Friday, the YoY growth was 12.2%. It also means that the staggering £59m of sales revenue driven for our advertisers accounted for almost 5% of total spend on the day. 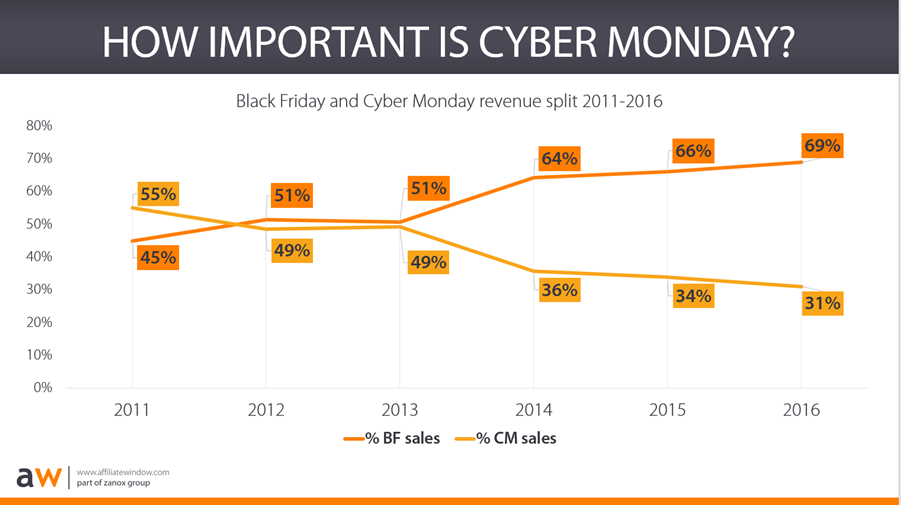 We will be producing a full round up of our trends for this period in due course. We’ll be analysing the impact of advertisers starting their promotions early and whether this affected the numbers on the big day itself. We’ll also be taking a look at the roles different devices played throughout the day and the impact that the depreciating pound had on overseas consumers.

Please keep an eye on the blog for further analysis of Cyber Weekend.

© 2022, AWIN Ltd. All rights reserved. Awin is part of Axel Springer Group. No part of this publication may be reproduced, translated, stored in a retrieval system, or transmitted in any form or by any means, electronic, mechanical, photocopying, recording or otherwise, without the prior permission of the copyright owner.