Awin is deploying its new Commission Manager across its advertiser base. The deployment requires a gradual, managed movement of advertisers to the new tool, with all new programme launches given access to the new Commission Manager as standard. The new tool also introduces innovative features for publishers such as giving a clear view of past, current and future commission rates and the protection of publisher commission rates from sudden and unnotified changes.

Over several months, all existing advertisers will migrate to the new Commission Manager while all new programmes will be launched on the tool as standard. This deployment is the culmination of many months of work to re-architect Awin’s commission service, bringing a variety of improvements. The new commission service has been in test mode since last year, running in parallel with the existing service to ensure complete parity of commissions before general release.

When will the new Commission Manager be rolled out?

Awin’s phased deployment, while necessary for the safe distribution of a core service, means that publishers will have two interfaces to view Commission Management. There will be no change to the existing functionality for advertisers continuing to use the previous version, however once an advertiser has upgraded to the new version, publishers will have a new page in the UI to view commission information. All Awin advertisers are expected to be using the new Commission Manager by Q4 2020, at which time the previous page will be available for reference only before being removed entirely from the UI.

What are the added benefits of the new version?

Once an advertiser is using the new Commission Manager, the first thing they will notice is the improved, simplified user interface. This includes the removal of Commission Templates, although they will still be visible for reference. Awin has introduced program standard and publisher specific rates and the ability to manage individual or group publisher commission changes. These are visible in a timeline view giving a past, current and future look at commission rates, a feature available for both advertisers and publishers. This makes it as clear as possible for all parties to see when commission is changing or has changed. All changes are clearly labelled allowing you to pinpoint special promotions, incentives or any other circumstance that affects commission rates. The image above shows a screenshot of the timeline view. Publishers will be able to see which advertisers are yet to migrate to the new tool as their timeline will be blank. 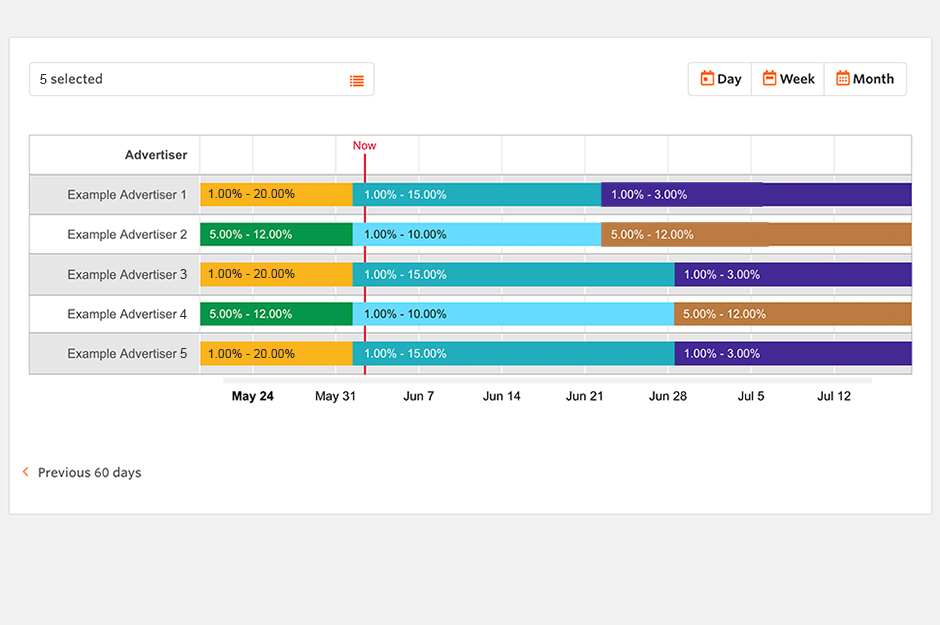 Alongside the increased flexibility and ease of setting and changing commission rates, restrictions have been introduced to protect publishers and ensure fairness. Rates cannot be lowered by more than 20% in a 30 day period with a seven day notice period enforced by default. This notice period can be adjusted within your programme terms.

To support these changes, Awin is also sending publishers a twice daily condensed update email summarising all upcoming commission changes. This allows Awin to reduce the volume of emails sent to publishers and to increase their efficacy.

Does the new version work with other Awin commission tools?

Awin’s existing commission tools such as Commission by Basket Value and Cookieless Voucher Attribution are all compatible with the new tool ensuring continuity when switching to the new version. Additionally, the majority of the technical work has included substantial backend development which significantly increases performance and makes it much easier for Awin to introduce new commission features in the future. Both Commission by SKU and Commission by Custom Parameters are currently in development and will be available by the end of the year, so keep an eye out for further information about these releases.

Awin’s primary concern during this period is a disruption-free migration to the new Commission Manager, and as such will be on hand to support both advertisers and publishers with any questions or concerns they may have.

We recommend familiarising yourself with the new tool. Guides can be found in the wiki for both advertisers and publishers.