With a 20% annual increase on 2019, publishers promoting thousands of brands across the network drove an average of 28 sales a second throughout the 24 hours.

Spain, Italy and Germany were the markets with some of the biggest year on year growth, but the Nordics saw sales grow by almost 50%, posting the biggest regional annual gain.

One of the day’s peaks occurred in the early evening when the network tracked almost 70 sales a second, another Awin record.

Black Friday is no longer limited to the performance across one day, or indeed the wider Cyber weekend. Many brands have shifted their promotions earlier in November, marking it as a much longer promotional window for publishers.

Black Friday in 2020 relative to the performance of the same day last year is plotted here for each of Awin’s European and American markets:

While physical stores have been open across the majority of countries Awin operates in, shopping in the safety and comfort at home will no doubt have contributed to the robust performance. 2020’s growth has seen sales on Black Friday more than double since 2018 as more countries adopt the American consumer event.

The growth comes despite the depressed performance of travel. This manifested itself in the shift of sales Awin tracked across the four main sectors it runs affiliate programmes in. With more than 90% of the network’s campaigns categorised as retail, it’s no surprise that this vertical dominates, but there has been a noticeable sector shift as the pandemic continues to wreak havoc for overseas and domestic travel:

As retail surged so the lower average order values had a knock-on impact on commissions which typically saw more modest increases.

Black Friday is notable for its focus on high ticket electrical items which invariably sees a surge in the size of the typical basket. This is evident from average orders tracked across November when compared to last year’s performance: 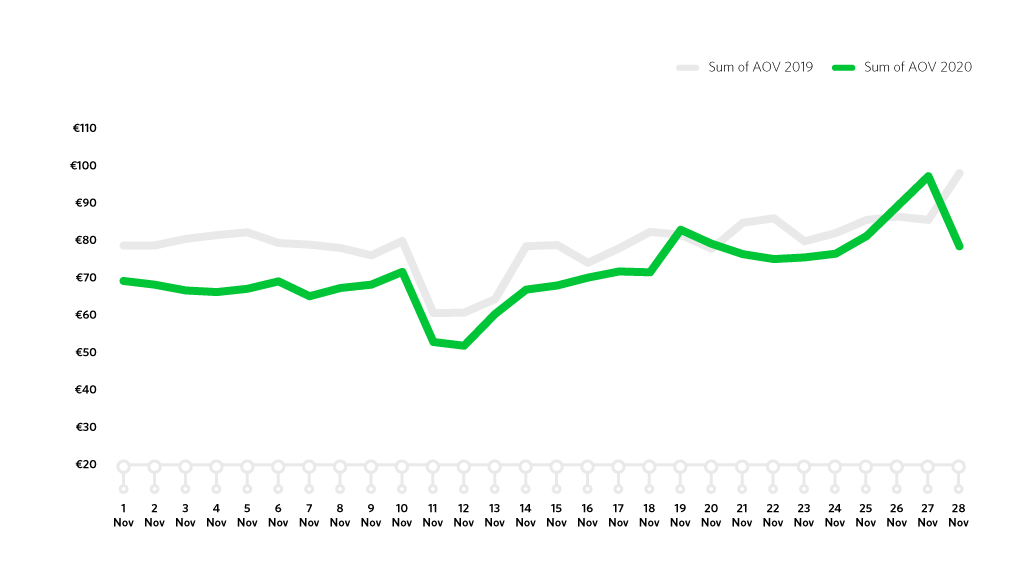 That said, the average sale in 2020 was around 9% less than that seen across Black Friday in 2019, signifying a wider trend across the whole month. This may also be indicative of deeper discounting that has been witnessed as brands try to offload excess stock as well as a desire to recoup losses suffered this year.

According to UK retail body, the IMRG, more than double the number of retailers they monitor are offering whole site discounts compared to 2019.

One of the biggest winners from this year’s Black Friday has been in the voucher and coupon space. 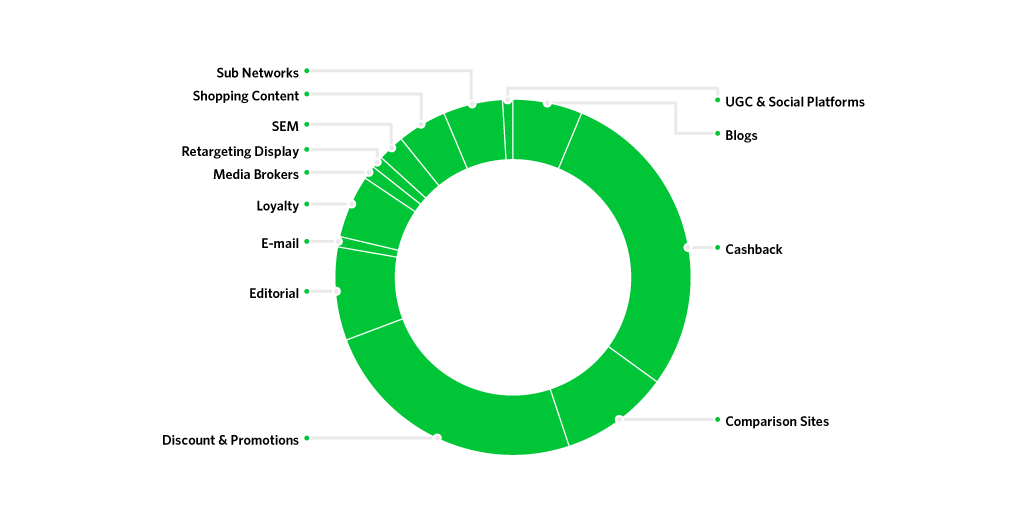 Cashback sites emerged the biggest overall publisher type, but their growth was a little slower in 2020 than in 2019, meaning their market share shrunk by one percent. Vouchers and coupons by contrast gained three percentage points to account for around a quarter of all commissions. Combined, coupon and cashback categorised affiliates made up 53% of the network’s commissions.

Commissions piled on in mid-November

A combination of lower commissions for higher ticket electricals, diminished rates for repeat customers and a lower number of weighty, promotional telco bounties around Black Friday saw YoY publisher earnings slow around on the big day. While the weekend before Black Friday saw 2020 commissions increase by almost 50% on 2019’s numbers, this trend dropped to more modest single-digit hikes in the run up to Black Friday, before recovering some ground: 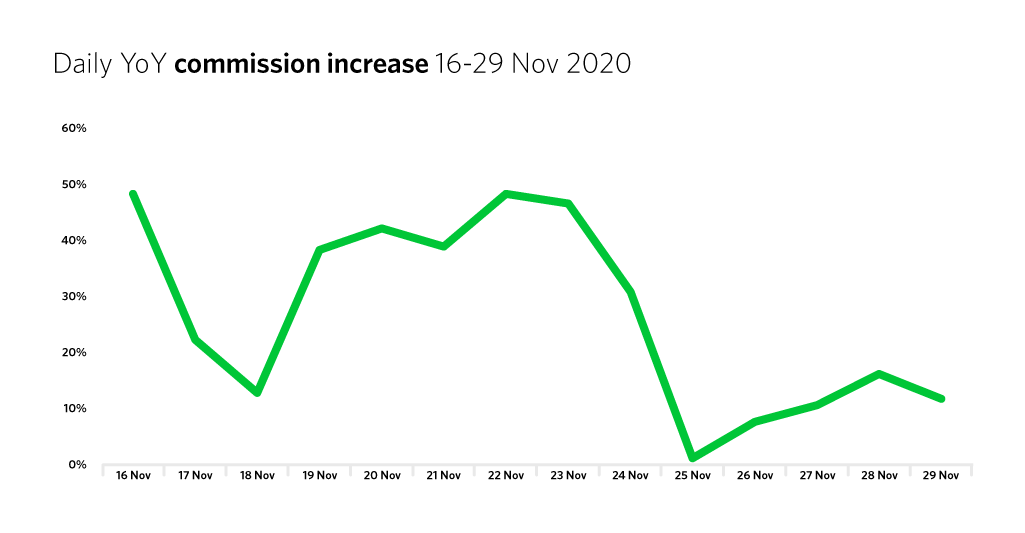 Without the context of Cyber Monday, we can’t be sure whether the US will continue to buck the trend of Black Friday being the smaller online sales day and whether Brazil’s performance will dominate the month.

But there are some quick takeaways:

Remember, you can monitor the weekly performance of the network through November and December using this tracker.