This marks an increase of 27% year-on-year, solidifying the retail juggernaut in many territories previously resistant to the West’s largest retail event.

The top four countries witnessing the biggest hikes on 2016’s revenue numbers were: 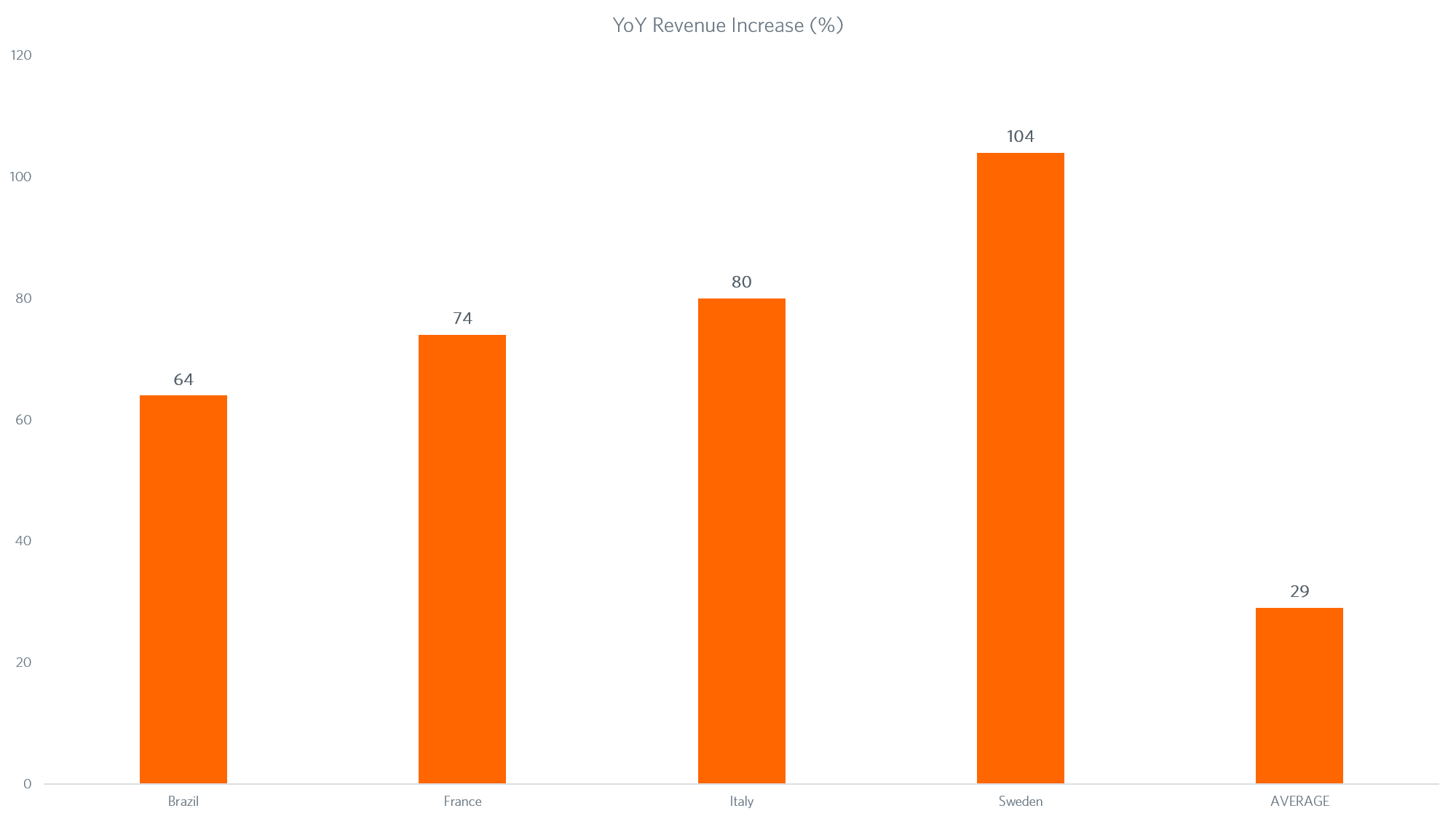 The US too continued to see Black Friday transition from an in-store to an online event and with Cyber Monday’s numbers yet to be tracked it remains to be seen whether it has established itself as the biggest trading day in North America. In the US sales through Awin’s affiliate programmes almost doubled while revenue was up by 62%.

The UK has been the major talking point on Black Friday for several years, with Awin’s research showing that despite being a traditionally American event, shoppers in the UK have spent proportionally more than any other country. However, revenue growth was less pronounced with sales experiencing an 11% hike, impressive by itself but less of a headline than elsewhere, highlighting how seasoned the UK shopper has become to Black Friday sales.

When the dust has fully settled on Friday’s trading there will be much discussion about whether the decision by retailers to go even earlier in 2017 stripped the day of the momentum seen in previous years in the UK. Midnight, which last year saw one of the biggest hourly increases, experienced a 14% drop as more savvy consumers felt less compelled to hunt down a bargain as quickly as possible.

Another noticeable feature of this year’s event was the continued march of the smartphone. Across the network almost one in three sales were tracked through handsets, meaning transactions were up by more than one-third. Tablets continued to fade in importance, dropping 50%.

In the UK the volume of handset sales increased to almost 40% with Sweden narrowly behind. The top five performing markets by percentage of transactions was completed by the Benelux region, the US and Italy: 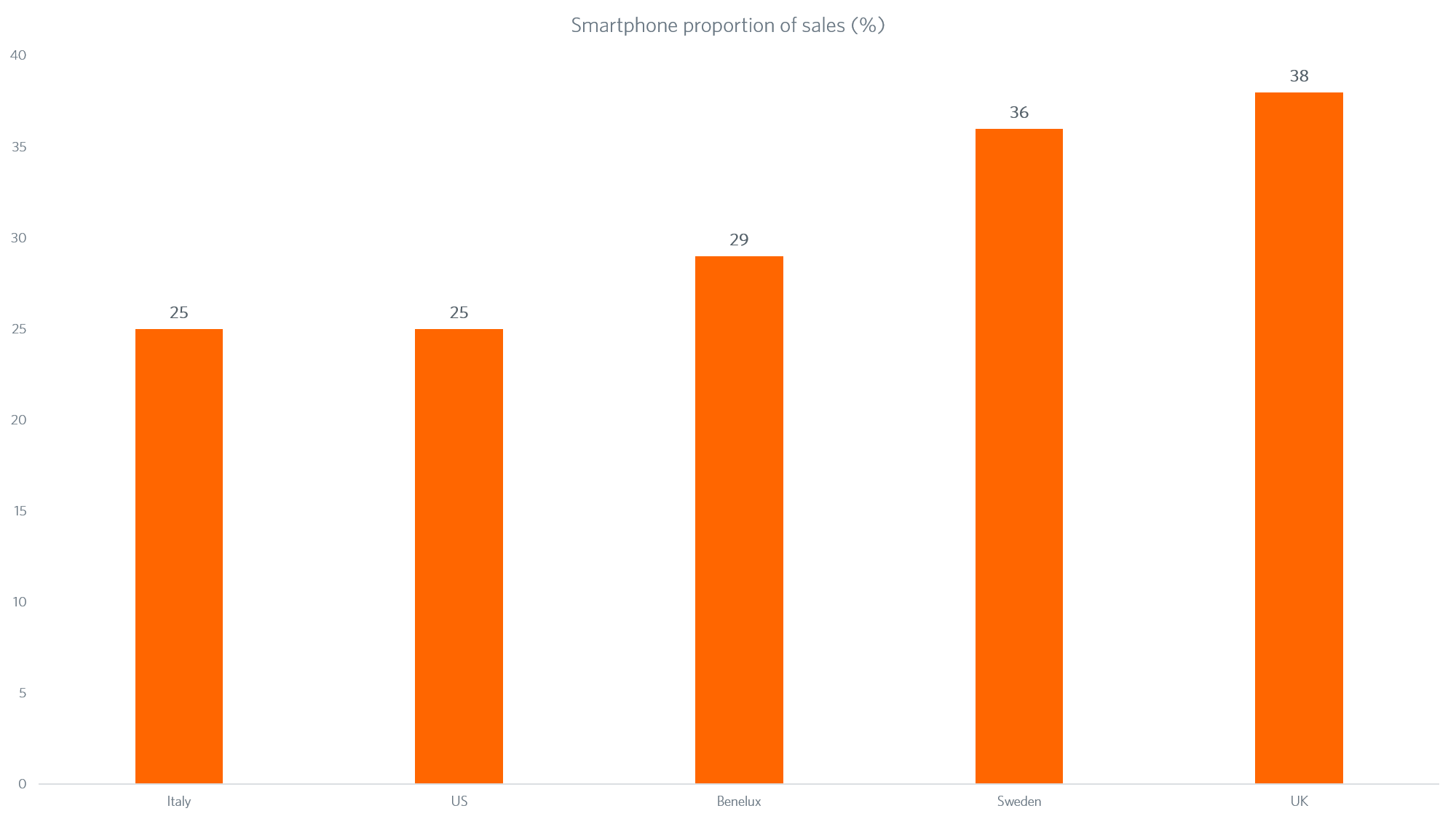 While 9pm was the largest hour by volume across the whole network, smartphone sales also saw a significant increase at around 9am, invariably as people were on the move heading to work and starting their days. Given that many people would have been browsing and researching products at work, probably from their work desktops, then completing purchases late on this underlines the importance of both tracking consumers across multiple devices but also recognising that different affiliates have the ability to tap into shoppers at different points in the day.

This is evidenced when the affiliate split across the network is considered. Price comparison, social traffic and content sites accounted for 32.6% of transactions on Black Friday across the network. This figure rose to 37.6% when just handset transactions are considered and dipped to 29.9% on desktops, underlining how consumers interact with content across multiple devices across the day.

The nature of Black Friday and the depth of the discount available means that many consumers are looking to spend more than they normally would. Not only does the desire to purchase have an impact on conversion rates, but it also drives up the average basket; on Black Friday this increased by 6% year-on-year and more than almost 20% compared to the weekend just gone.

Finally, cementing its position as a truly global phenomenon, Awin tracked sales across almost 200 countries on Black Friday as more and more consumers seek to track down a bargain.

Black Friday continues to defy expectations. In the space of a few years its grown into a universally adopted sales event that the affiliate industry can rally around. The full impact is still to be assessed and context with Cyber Monday considered. When the dust settles we will be able to write the next chapter in the ever changing retail story.

If you'd like to look into our global performance in more detail, we’ve put together a comprehensive and fully interactive report showcasing Awin’s global data from the day, comparing year on year figures as well as data from previous Fridays in Q4.  The report defaults to compare total network data, but can be uniquely filtered to individual countries, sectors and time zones to provide local insight into each market.  The report is now hosted on our Black Friday hub.

The report looks at a wide range of data points, including sales revenue, average order value, traffic, sector performance as well as top performing locations and most used devices to browse and purchase.  Hovering over the graphs within the report will offer Tooltips for each section, and further help can be found by selecting the help feature.

Thank you to all who entered our #AwinBlackFriday sweepstake. As the total amount of revenue tracked was €145,622,958, from the entries we received before the deadline of 23:59 Thursday 23rd November, Matt Bailey of Cure84.com had the closest prediction with €144,200,000 and is the winner of a £250 Amazon voucher. Congratulations!