The event marked a departure from the confusing X, XS and XR naming structure that, much to the dismay of Apple’s marketing team, are commonly referred to as the letter X as opposed to 'ten'. Whilst it may have seemed that the naming structure is mostly a gift to confused consumers, our data suggests that it is Apple who is resetting its strategy in response to consumer demand. Tim Cook referenced that the iPhone XR was the bestselling iPhone ever. Let's examine what the trend truly looked like.

If we rewind back to 2017, there was huge buzz prior to the announcement that Apple were going to redefine the iPhone, moving away from the iconic one button design, to a nearly all screen device. Apple were going to set the new industry standard. At the event, Apple announced the iPhone 8, which was very small upgrade from the iPhone 7. However, the real star of the show was the iPhone X, Apple’s ambitious new design for the next generation of smartphones. The price for the iPhone X, the so-called future of mobile phones, was a wallet busting £999. For context the iPhone 8 was £699 and the iPhone X’s nearest competitor, the Galaxy S9, clocked in at £739. There was clearly the belief that the hype would cause the iPhone X to be a bestseller, one that was able to turn around a relatively stagnant smartphone market.

Whilst the phone was desirable with its bold new look, Face ID and Animojis, it seemed that the price was too much for the consumer. Looking at our data that goes back to January 2018, it shows that merely four months after the launch, the iPhone X was consistently beaten by the cheaper and older style iPhone 8 and iPhone 7. 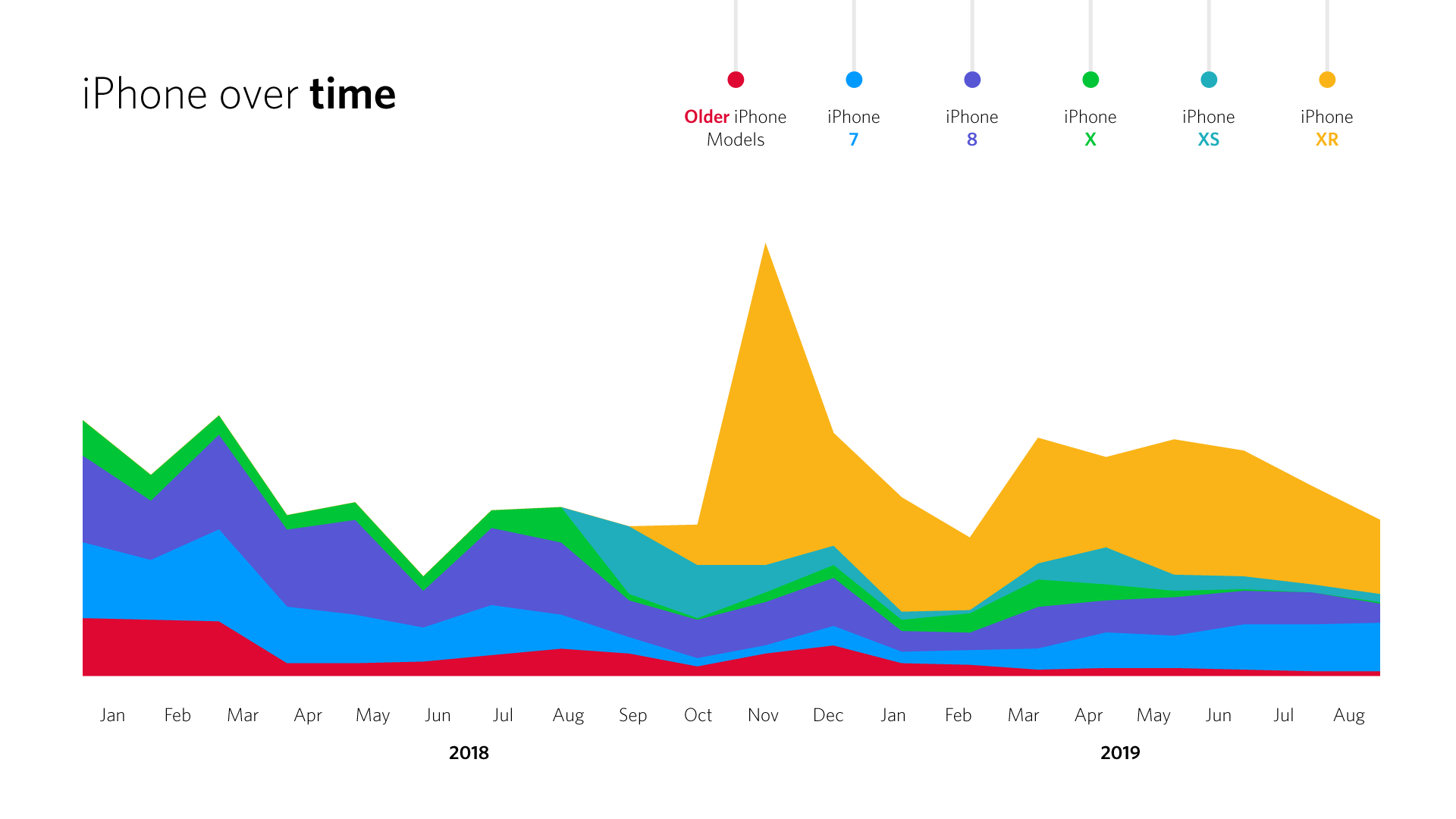 Last year, Apple’s event introduced the world to the improved iPhone X, the iPhone XS and a larger iPhone XS Max. However, the wildcard of the event was the iPhone XR. This device was the budget option, with a cheaper LCD screen vs the XS’s OLED, one less camera and a chunkier, less refined design.

Naturally, you would have thought that the XS would have had the bigger launch as the ‘flagship’ product. Apple are also famous for using strategies pushing people to the middle product, which in this scenario was the XS. Whilst our data shows a rather healthy launch for the XS, the XR’s launch the following month was +146% times larger. It seemed that for the average consumer the price saving was worth the loss of features, and the iPhone XR looked the part of a new iPhone and that was what mattered most to users.

Within the market there has been increasing diversity with some Chinese manufacturers releasing so called ‘flagship killers’ at the £700 and lower mark. Couple this with Google and Samsung’s continued aggressive marketing tactics against the iPhone, and you would expect to see Apple’s share diminish. 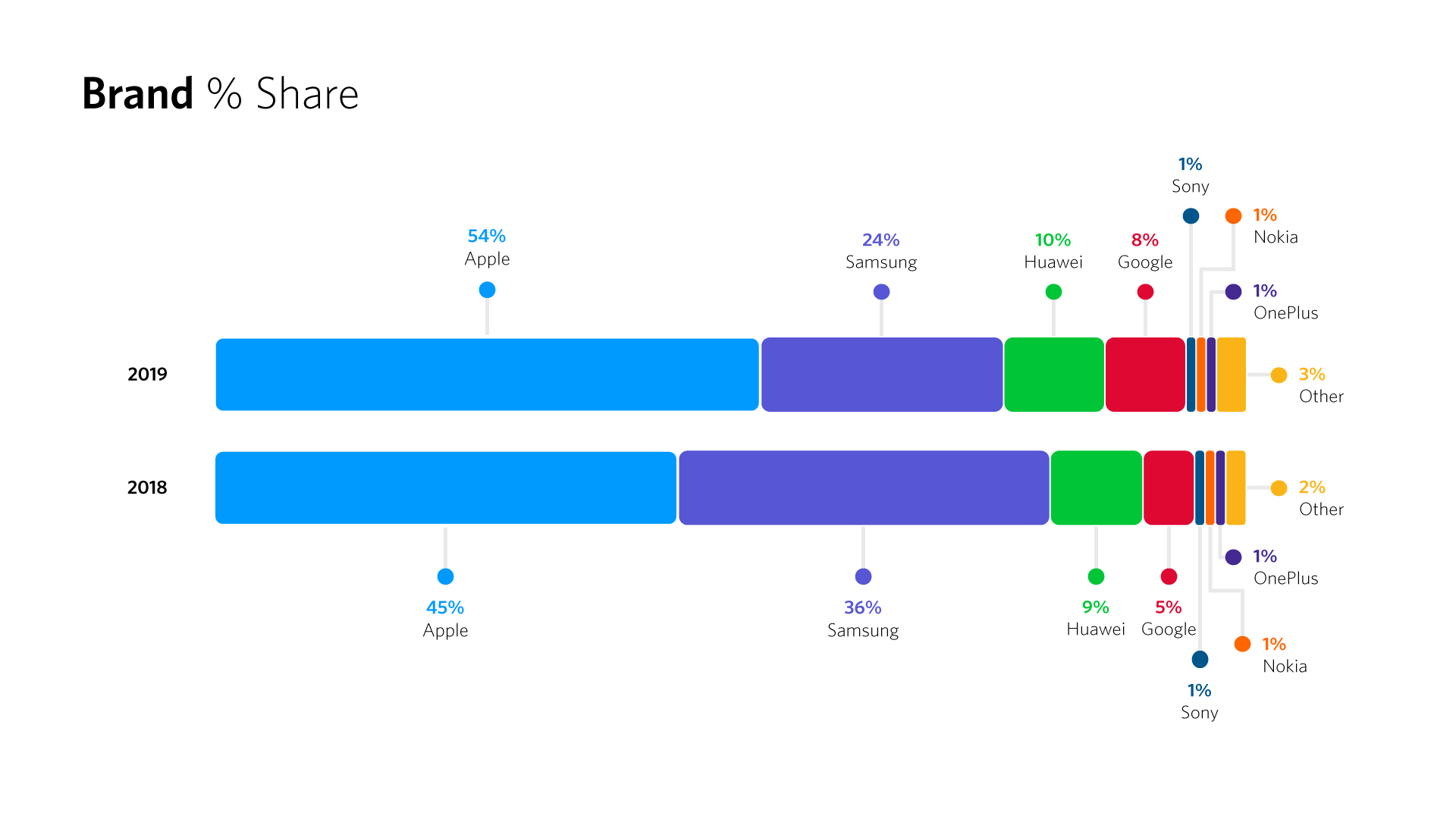 However, following its launch, the iPhone XR has continued to be the best seller not only within the iPhone market, but amongst all handsets sold across the network. Our look at the top handset manufacturers in 2018 would have suggested that Apple was likely going to lose share in 2019, however, the data to date shows Apple’s share has grown even despite gains from the likes of Huawei and Google. We believe the data shows that the iPhone XR is the sole reason for this. You could even say that the iPhone XR saved Apple. 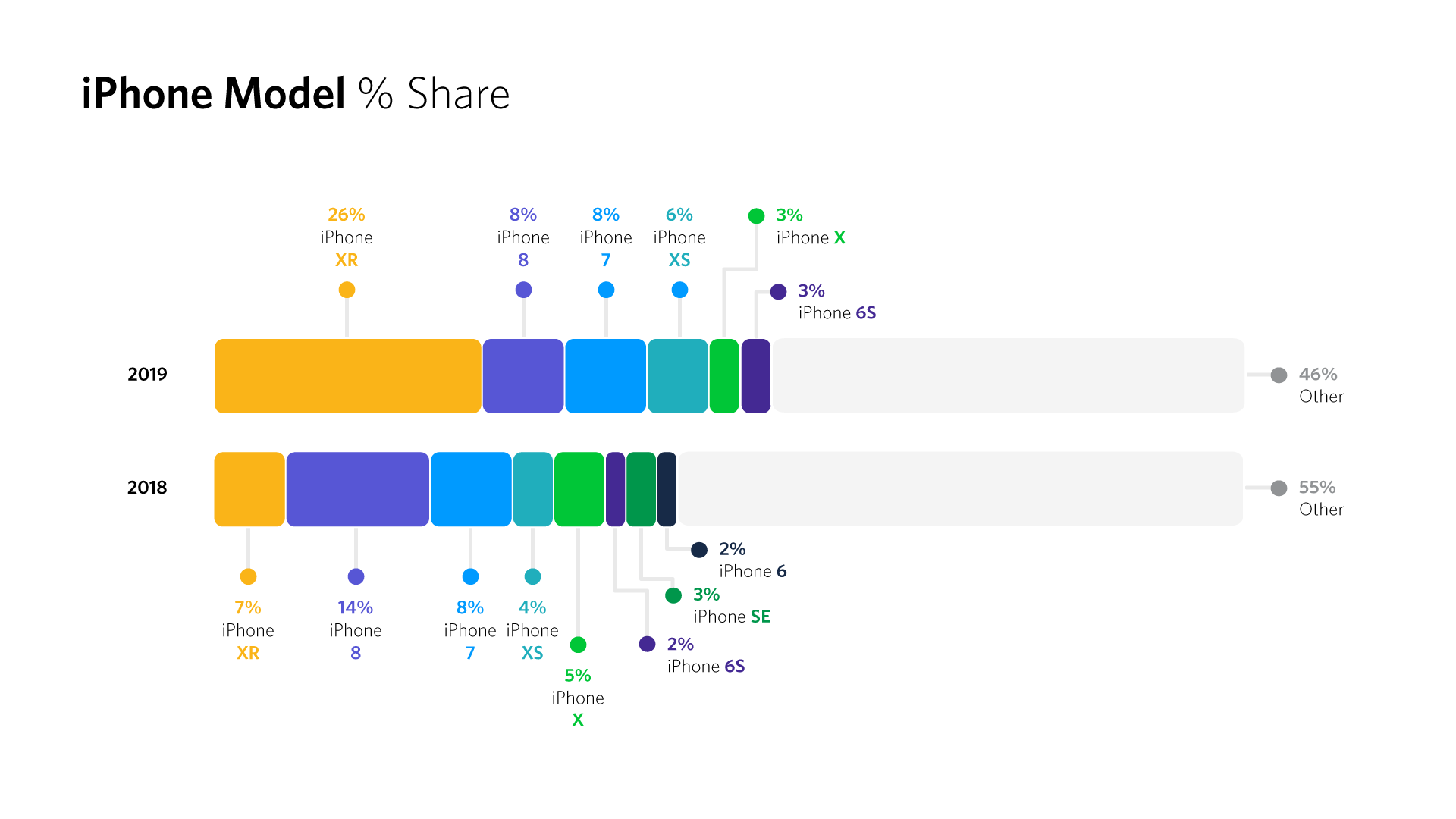 Thus, looking at today, it is unsurprising that Apple have set the iPhone XR’s successor as their new default phone. This shows recognition that the average consumer doesn’t entirely understand what an OLED screen is, and why it is worth paying a difference equivalent to a one-night stay at the Waldorf Astoria Hotel in London. The XR has been a reminder that mass market consumers are still conscious of price, even for Apple products. The fact that a brand as powerful and as valuable as Apple was unable to convince consumers to go for a higher quality product shows the challenge in consumer education within the technology and telecoms sectors. With this in mind, it will be interesting to see whether the industry will be able to push consumers towards their premium products, particularly with the current rollout of 5G technology.

We anticipate the iPhone 11 will continue the XR’s legacy and remain the bestselling iPhone of this year’s releases.  Apple has had to ‘Think Different’ about where it needs to focus in terms of price and product hierarchy. The iPhone 11’s price starting at £729 shows a real focus around the sub £900 price point. However, the iPhone XR remaining on sale at £649 may allow Apple to test performance against the likes of Huawei.

Rumours are already in full swing about a budget iPhone in early 2020 and, if it materialises, it will be interesting to see whether it will bring more customers into the Apple eco-system, and how it impacts the diverse Android market.