17:24: Until 4pm today, two-thirds of the way in, total sales tracked across the global network are approaching 700k (618k), considerably up on last year.

That's us data-ed out for today, but there's more to come. From tomorrow our interactive report will be available on site and next week we'll be providing a full digest followed by our top insights from this most important of retail events.

While Black Friday 2017 has still to fully play out, the day before is a good indicator of what the flow of traffic is likely to be. For the Awin network we tracked 15% more sales  on the Thursday prior to the big day.

Take a look at this graph that shows November performance YoY: 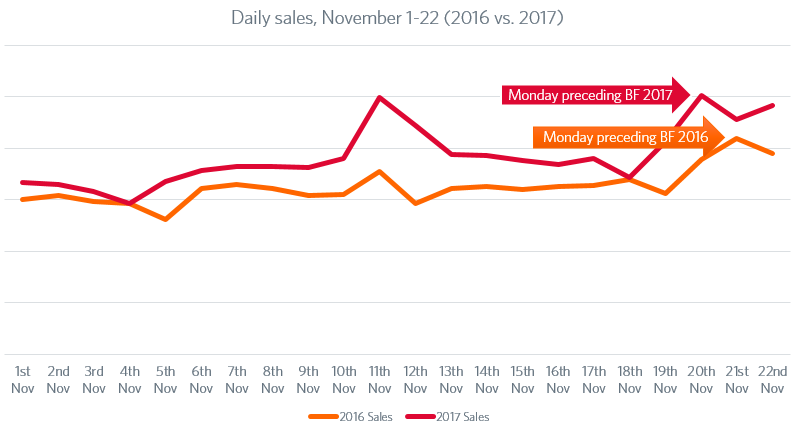 While today is Black Friday’s chance to shine there’s no getting away from the fact that it’s been overshadowed in recent years by the world’s biggest shopping event, Singles’ Day. This year the Chinese shopping phenomenon broke its own monumental records and posted figures that dwarf Black Friday and the wider Cyber Weekend. 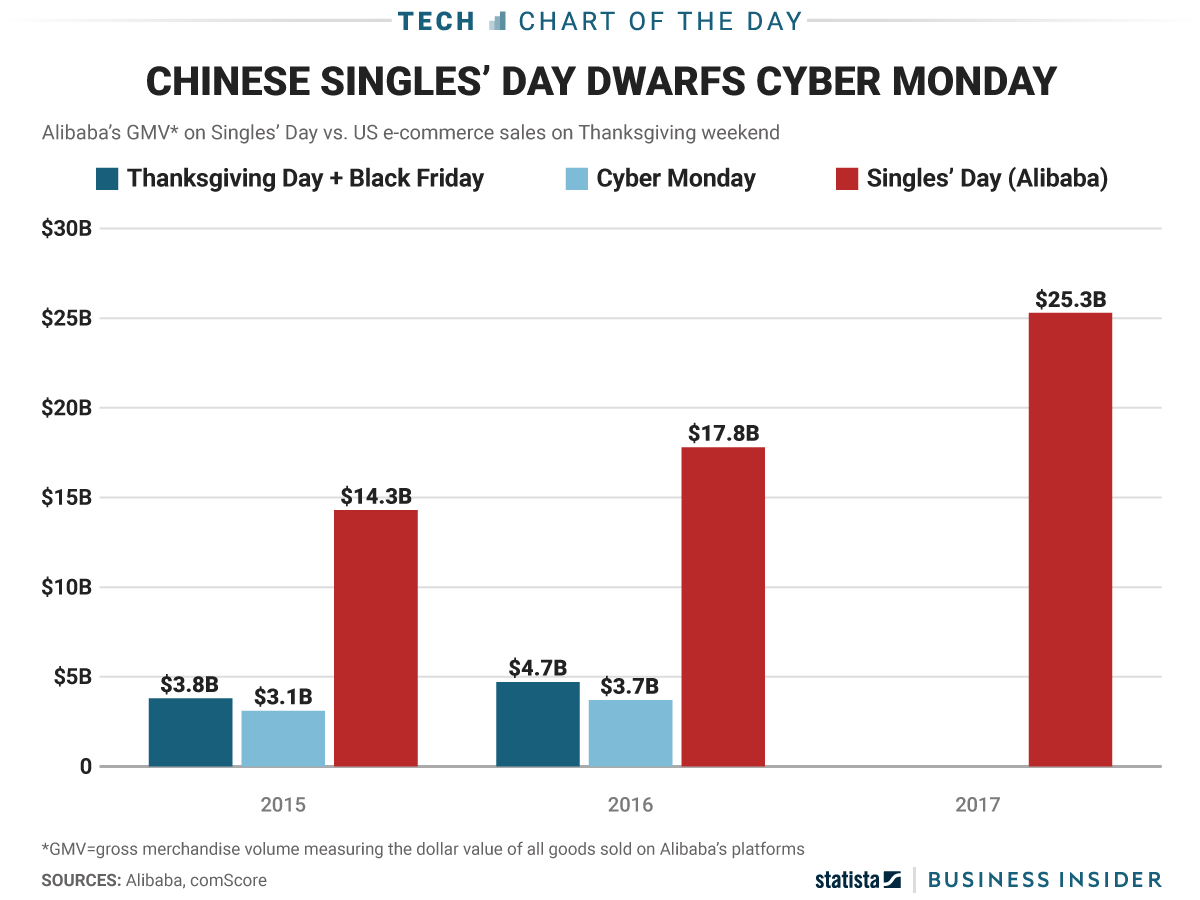 We published a two-part series analysing Singles’ Day recently focusing on the unusual tactics used by Chinese retailers and then looking at some of the activity that Awin’s network tracked on the day.

Global statistics on the growth of revenue driven by publisher types are in and reveal some interesting gains and losses for different types of affiliate and the size of the baskets they’re converting.

Awin runs affiliate programmes across all the Nordic countries. Splitting the data out we can see the  split between the four territories and the percentage YoY uplift: 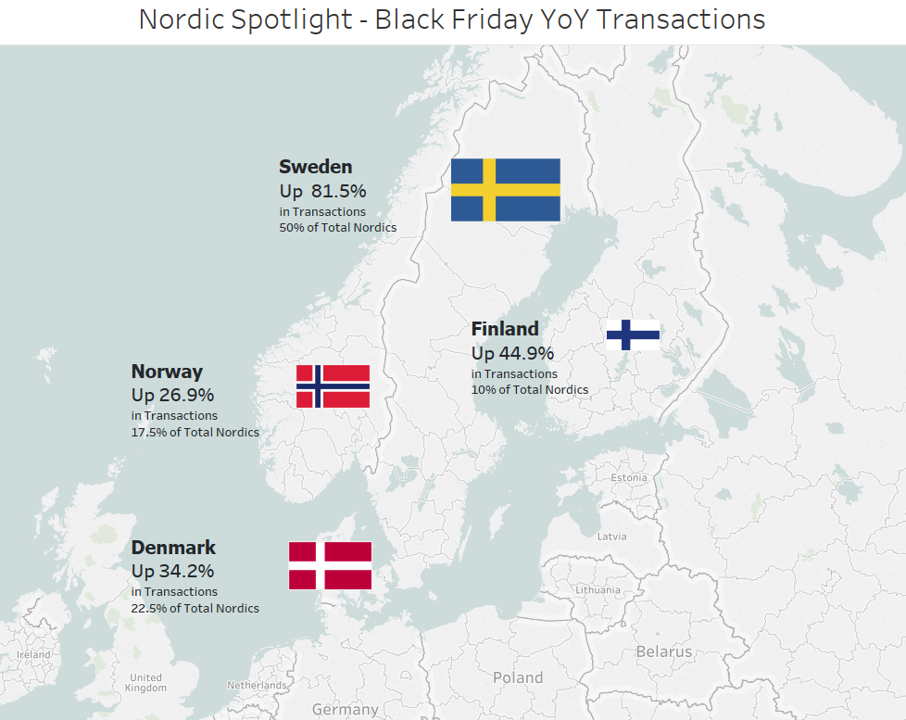 14:55: Early morning indifference giving way to afternoon  appetite? This Black Friday could be remembered for a slow start to the day. That's born out by one of our major retailers in the UK whose sales were completely static at the start of the day but post-lunch are seeing an overall 4% increase. Since lunchtime they're up 7%

Research published by eMarketer highlights the high levels of discounts that Brazilian shoppers expect from retailers this year. Black Friday has been eagerly adopted by Brazilians and clearly consumer expectation is high after previous sales from advertisers there. 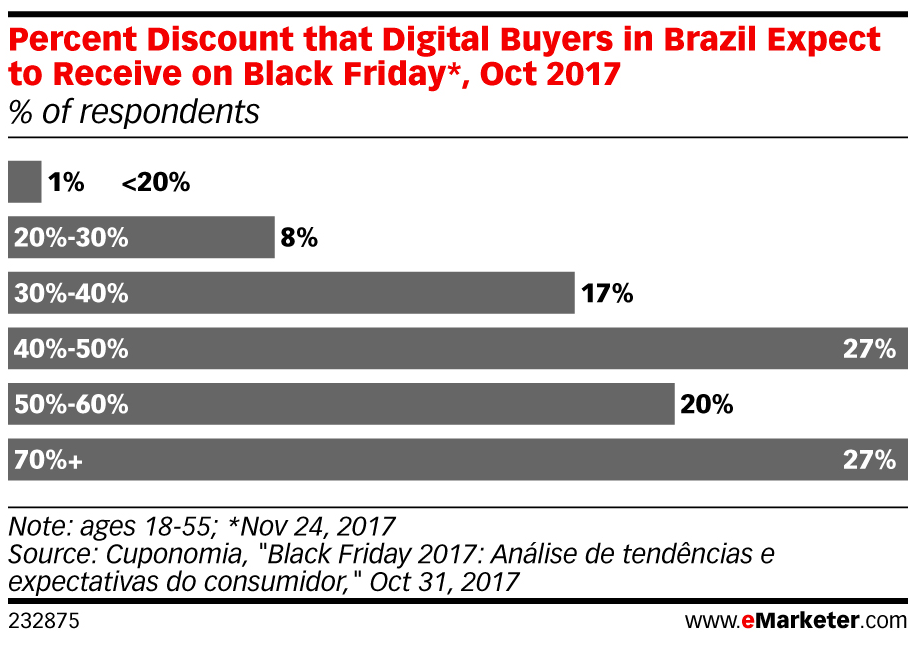 14:22: Sector splits. Here's the data  to late morning showing the sector split across the network and the YoY variances: 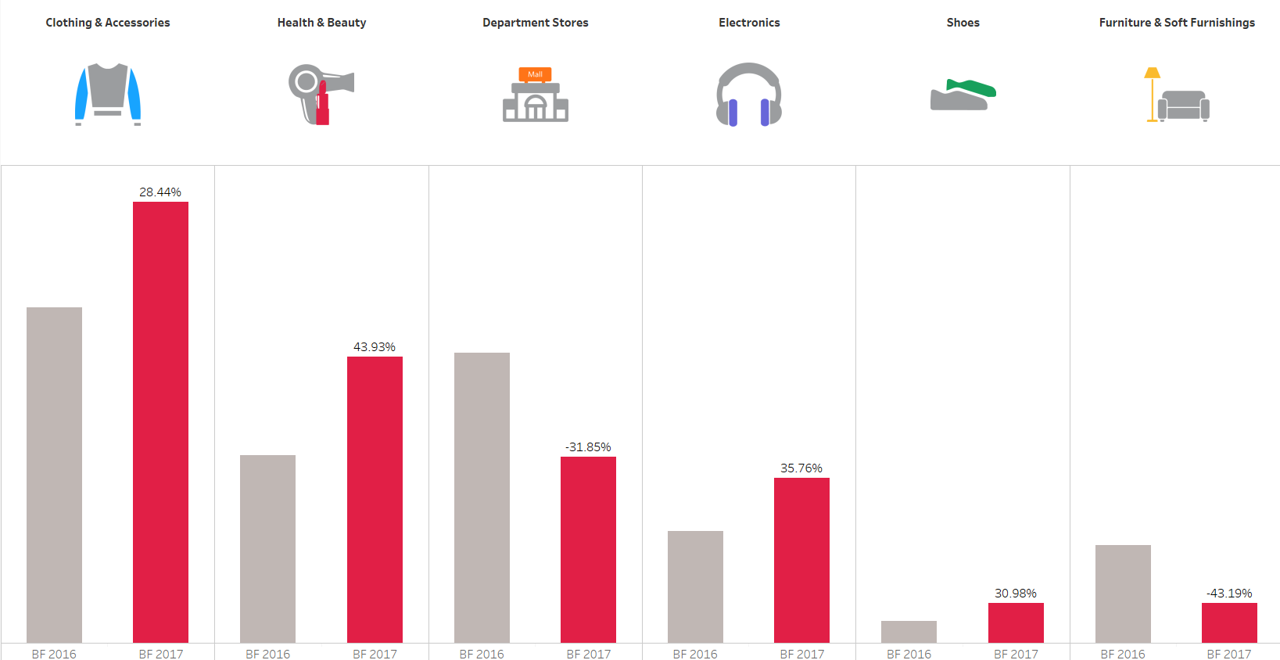 14:10: Early conclusions: So we have around ten hours to go but the data produced so far leads us to the following initial conclusions:

One retailer who has already recognised the value of cross-device tracking is Red Letter Days in the UK. In an interview with their Online Marketing Manager, Dan Williams, he revealed how being able to track users across devices was helping them attribute Black Friday sales more accurately: "We are seeing more and more people come to the site on mobile but convert through desktop. With the start date for Black Friday promotions getting earlier and earlier every year it has become more important to us to make sure we have as much visibility on cross-device journeys as possible. Our average time between click and sale on one device is less than one day, whereas on cross-device sales it is around six days. Having cross-device in place means we will be able to see how much our early promotions help drive sales on the day itself."

13:57: The importance of next generation, cross-device tracking.

Having shared smartphone stats from across the network, one of the  most important considerations is how sales track across devices. If you want to understand the additional impact - often on content, social and longtail blogger - then look at this sales mix for one of our major retailers: 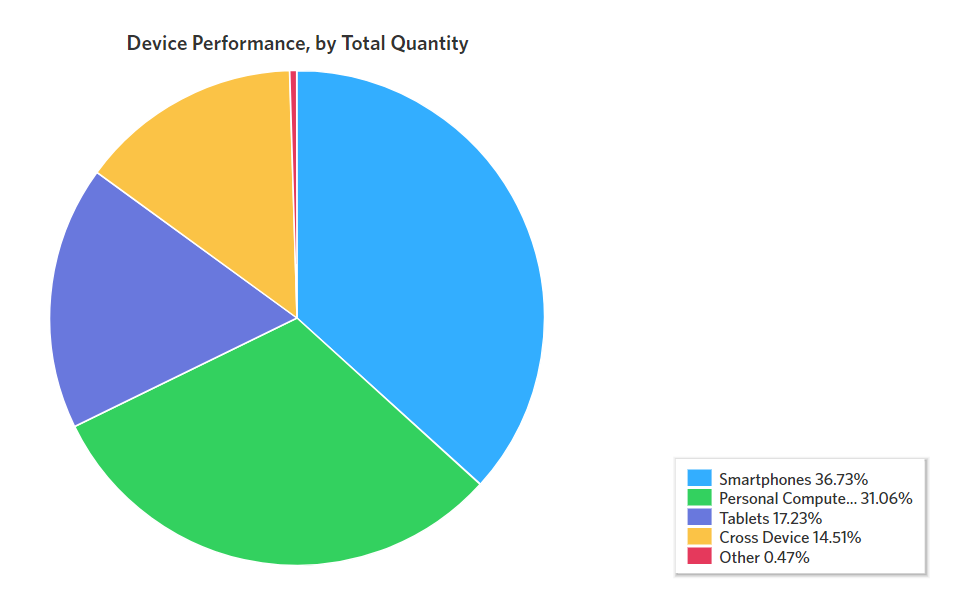 While mature markets like the US haven’t seen the same level of crowds in-store this year it would appear that in other regions, where Black Friday has only recently been adopted, chaos is still something of a characteristic for the event and retailers have struggled to cope. These videos from South Africa are just one example…

13:33: Smartphone stats around the world: One of the most interesting insights to consider across Black Friday is which devices drive sales in different markets. Here we present nine markets with desktop, smartphone and tablet splits to 11am this morning: 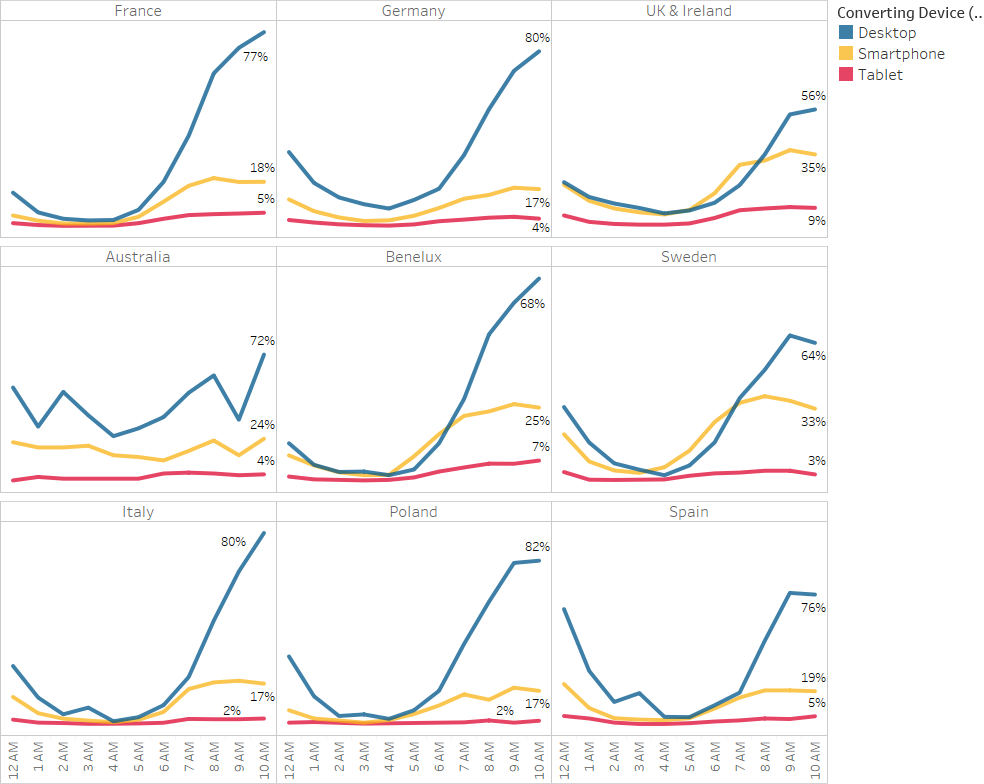 It's approaching 9am across the Atlantic and Reuters are reporting that there have been distinctly fewer shoppers turning out in the early hours at high street shops and department stores in the US as more people turn to online shopping for their Black Friday deals. With US advertisers  focusing more effort on ecommerce, agencies like PartnerCentric are helping them utilise affiliate sites to target these shoppers. Read more about their advice for Black Friday tactics in our recent interview with them.

Retail Week's own analysis of Black Friday 2017 performance reveals a similar trend to what we're seeing on our UK network with declines in sales growth in the early hours (see 12:32).

In partnership with PCA Predict they've been monitoring sales trends and have been "surprised" by a 24% decline in purchases between midnight and 7am today.  PCA Predict's head of marketing stated earlier: "This longer sales period has shifted the emphasis away from Black Friday being a major retail event in its own right, towards becoming part of a pre-Christmas mini season or “Golden Quarter” for retailers."

Top three advertisers until 9am show consistent performance for two, the black lines here referencing the commission across the same time period by hour. Look Fantastic continues to pull in huge numbers in the early hours because of the attractiveness of their proposition to overseas consumers:

Across the network, yet again the early hours of the morning are proving to show the biggest YoY increases, with growth slowing as the sales rise.

The double digit numbers are disguising lower than anticipated UK growth; could the wall-to-wall offers  that have been dominating the ecommerce landscape for the past two weeks have created buyer exhaustion?

The picture is mixed, the consequence of several big brands scaling back on certain promtions having a huge impact on their numbers. That said, those who've hit Black Friday hard are seeing high double and sometimes treble digit growth. 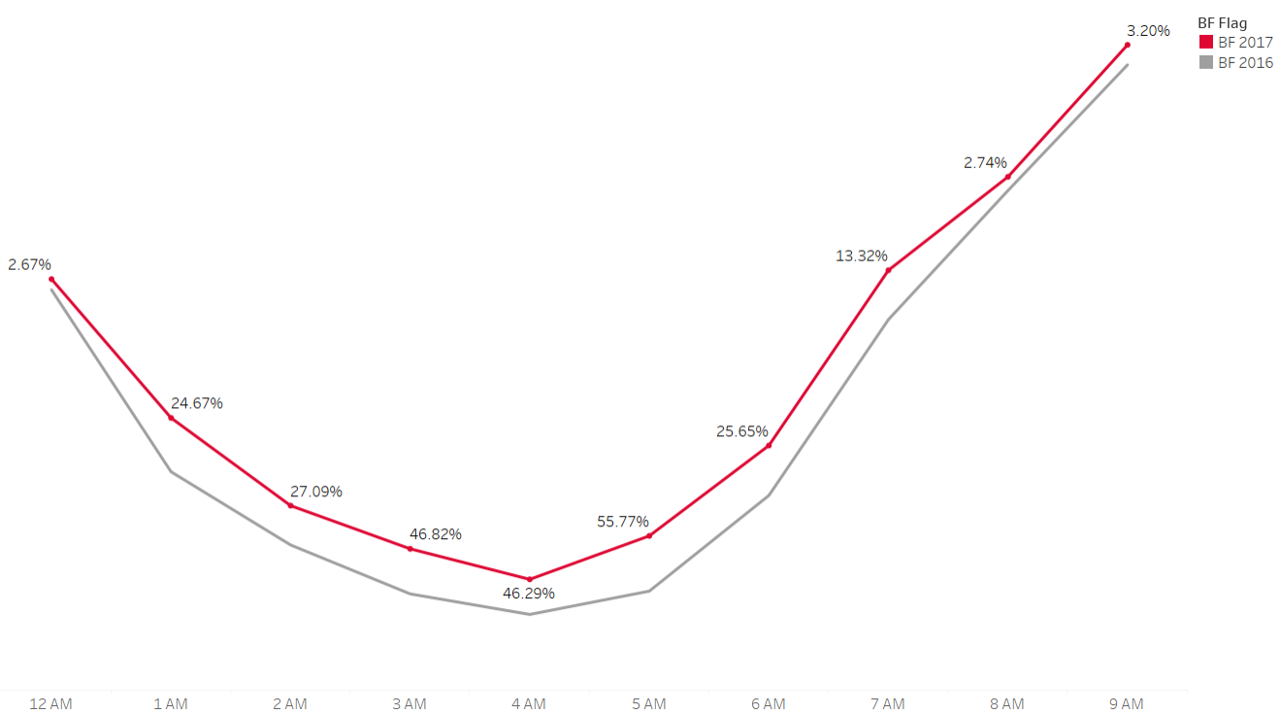 LookFantastic, Currys  and Tesco  are leading the way as far as sales are concerned across the network this year. Will these three manage to retain the top positions by the end of the day?

Italy's Consumer Protection and Advocacy Association (ADOC) have carried out a survey with consumers there to gauge their appetite for Black Friday this year. According to the results around 30% of the population are keen to take part in the deals that will be made available and prepared to spend on average around €250 each in order to take full advantage of these.

PwC data suggests that Black Friday is much more about people shopping for themselves rather than for gifting ahead of Christmas. Their findings came from a survey of 2,000 UK adults and Lisa Hooker, Consumer Markets leader at PwC said “Black Friday is not yet threatening the Christmas shopping period, with our survey showing the majority of purchases made over the weekend will not be gifts. Therefore, the first few weeks of Christmas shopping in December will still be vital for retailers, who will need to carefully manage their stock availability, IT systems and delivery infrastructure to deal with both shopping periods.

"Black Friday does have the potential to cannibalise the January sales, a shopping period more traditionally used by consumers to buy items for themselves - something shoppers may now be bringing forward to November.

“Many Black Friday sales have begun early and will extend past the weekend and could be turning into 'Black Fortnight' in some sectors. Whilst perhaps due in part to subdued October sales, it also reflects more planned promotions over this period.  Although we predict another year of Black Friday sales growth in the UK, it does fall comparatively early this year, before pay day for many consumers. This may present a cashflow issue for some shoppers and could result in slightly more muted growth.”

The first overall numbers for the day are in and we're seeing positive year-on-year growth. We'll bring you some more granular detail over the next couple of hours but the first data is showing sales up just shy of 20% across the whole network.

One of the interesting comparisons is between mature digital markets. Taking a fashion brand who run a series of programmes across Europe we assessed the  percentage of sales tracking through smartphones. As you can see all markets are driving significant volumes of handset sales with the UK tracking two-thirds through smartphones and The Netherlands almost 50%: 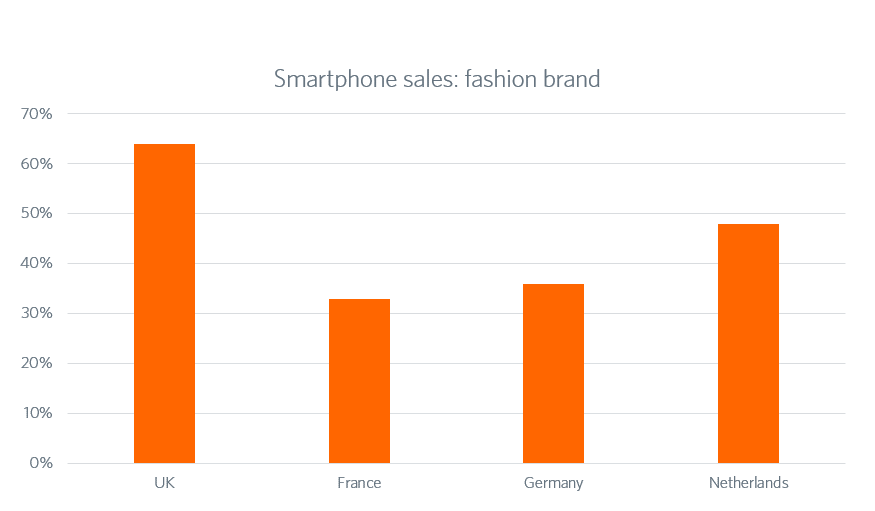 09:45: Some of the most interesting stats that emerge in the first  few hours of the day are around mobile as people search at midnight from their smartphones and on the way to work in the morning. Factoring in certain advertisers, such as fast fashion brands including Missguided and Boohoo, whose natural demographic is mobile first, and  a powerful smartphone story emerges.

Looking at one of our key fast fashion brands we can see that 64% of their sales so far today are tracking through handsets, dwarfing desktop at just 23%.

09:17: What is this Black Friday business all about then?

Continuing with the focus on Australia, the media Down Under was buzzing with expectation about the anticipated launch of Amazon's dedicated local site on Black Friday. However the launch failed to materialise on the day with only a limited storefront selling Kindle titles. With speculation rife in recent weeks that Black Friday would be the date of the big launch for the ecommerce giant, there is now much debate around when the launch will take place as this article from one of our affiliate partners, finder.com, explains.

What happened last year?  Black Friday 2016 was the biggest day in Awin's history. Tracking almost €118m in sales across the day, the network recorded in excess of 1m affiliate sales. It was a pivotal day for smartphones as Awin hit more than €1m in sales revenue for a single hour for the first time.

What can we expect this year? Black Friday 2017 presents an intriguing prospect. A glance at a number of UK retailers shows many of them have been in sale for more than a week already.

Will this dilute the impact of today's biggest deals?

Across the global network we saw around 50% growth in 2016; it would take something spectacular to see that figure bested. Double digit growth would certainly be positive. There are some other longer term trends that we won't be able to make conclusions about today.

In Australia Black Friday  is well underway and with just over six hours of the day to run there we have some statistics from our friends at Commission Factory:

Few people outside Australia know about Click Frenzy, a local event earlier in the month that also pulls in significant numbers, making November an absolutely huge time of the year there. These are the numbers from Awin for that event:

Thurs 23rd Nov - 10:48
We will be reporting live on Friday across the day, pulling in the data from the network and trying to shine a light on the developments as they happen. At just after 8am we'll be bringing you our initial top level numbers and reporting on how Black Friday is performing against 2016.

The team will also be sharing individual success stories and graphs and charts that build a picture of the day as it progresses. In the meantime, don't forget to check our predictions for the day here.